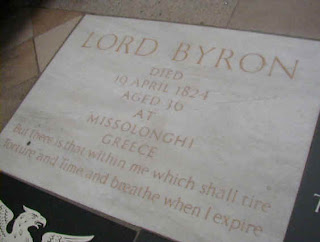 """""""This main street terminates at the wall of the graveyard in which stands the little gray church wherein Byron was buried. There is an iron gate in the center of the wall, and in order to reach this it was necessary to thread the mazes of the market-place, and to push aside the canvas flaps of a pedler's stall which had been placed close against it. Next to the churchyard wall is a little cottage, with a bit of garden, devoted, at that time, to potatoes; and there, while waiting for the sexton, I talked with an aged man, who said that he re-membered, as an eye-witness, the funeral of Byron. He stated his age and said that his name was William Callandyne. Pointing to the church, he indicated the place of the Byron vault. "I was the last man," he said, "that went down into it before he was buried there. I was a young fellow then, and curious to see what was going on. The place was full of skulls and bones. I wish you could see my son; he's a clever lad, only he ought to have more of the suaviter in mode." Thus, with the garrulity of wandering age, he prattled on, but his mind was clear and his memory tenacious and positive. There is a good prospect from the region of Hucknall-Torkard Church, and pointing into the distance, when his mind had been brought back to the subject of Byron, my aged interlocutor described, with minute specification of road and lane,-seeming to assume that the names and the turnings were familiar to me, the course of the funeral train from Nottingham to the church. "There were eleven carriages," he said. "They didn't go to. the Abbey" (meaning Newstead), "but came directly here. There were many people to look at them. I remember all about it, and I'm an old man—eighty-two. You're an Italian, I should say," he added. By this time the sexton had come and unlocked the gate, and parting from Mr. Callandyne we presently made our way into the Church of St. James, locking the churchyard gate to exclude rough and possibly mischievous followers. A strange and sad contrast, I thought, between this coarse, turbulent place, by a malign destiny ordained for the grave of Byron, and that peaceful, lovely, majestic church and precinct at Stratford-upon-Avon which enshrine the dust of Shakespeare....."""""

Much could be said about romanticism as precursor to totalitarianism (links oder rechts)--and Napoleon's sons, Byron/Shelley et al as precursors to Hollywood heroes, for that matter--, and much has. Check out Russell's comments in his History Of West.Phil. for starters (glib perhaps but rather superb to postmod obscurantists, or usual theological chitchat).

""The romantic form is to be seen in Byron in an unphilosophical dress, but in Schopenhauer and Nietzsche it has learnt the language of philosophy. ..." {Russell}.

Russell understands the essential fatalistic message from Schopenhauer's writings, unlike many hacks: it's not Spinoza's perfect pantheism, but close to an immanent, determinist viewpoint, really one might say a type of philosophical entropy, opposed to the dialectical victory march of Hegel (or his bastard son Marx). One could read Schopenhauer (not to say Nietzsche) as a type of precursor to postmodernism as well, and Russell while he doesn't dismiss Schopenhauerian pessimism, does not exactly approve of it. One hesitates to call Schopenhauer's system anti-rationalist, but anti-progressive in a sense, even stoical (retrograde probably to the comrades (and to monotheists), as is buddhism for that matter--though stupas large and small survived stalinist and maoist purges, as they survived centuries of onslaughts from mongols, muslims, and christian invaders).

There are a few mystical hints to Schopenhauer's thinking--nothing like the great supernatural visions of, say, Easter, or the book of Revelation (judeo-christians, and muslims for that matter, often criticize mysticism, yet both the Bible and Koran feature many supposed supernatural events. There's no eastern text I can think of which matches the Book of Revelation for utter supernatural weirdness).

Schopenhauer never sentimentalizes nature, or humanity for that matter (nor does he separate them); once the veil of Maya has been torn from phenomena, the sage perceives something like a...diabolical creation,of which he is part (in that sense, Schopenhauer seems faintly manichean--and also recall modern physics and relativity have called into question our "normal" perception of space and time, and objects, motion. Some of the ancient greeks, such as Zeno were aware of the problems of motion. Schopenhauerian/buddhist maya seems somewhat similar to the eleatics who denied that motion actually existed--in any discrete instant, an object may be at rest, even when apparently in motion.... ). The sage's task then consists of....negating that amoral creation, usually a futile exercise, though Schopenhauer believes that eastern thought offers some self-help tactics to deal with suffering, old age, death.

Verstehen Zee, Cowboy? goot
Posted by J at 7:45 AM

Interesting. "A man may be coarse, and yet not vulgar, or the reverse".

Or both, as conmigo.