The DUCHESS OF CORNWALL??

"""[Camilla] takes a tumble in Scotland ruining the plans for an anniversary celebration in Scotland. Camilla is an outdoor lover and was hiking without Prince Charles when she fell.

Camilla continued her hike but went home and on advice of her doctor had an X-ray taken of the leg. The next day, Thursday the results were reported by the Clarence House that indeed Camilla's left fibula was broken in the fall at Birkhill. """ 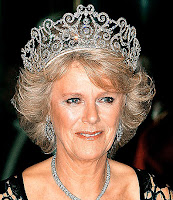 One of the descendents of Charles Lennox, an illegitimate son of King Charles II--ie Lennox born of one of Charles' mistresses--Camilla also has ties ancestral to her own husband Prince Charles.

"Hegel... defines the monarch as the personality of the state, its certainty of itself. The monarch is personified sovereignty, sovereignty become man, incarnate state - [or political - ] consciousness, whereby all other persons are thus excluded from this sovereignty, from personality, and from state - [or political - ] consciousness. At the same time however Hegel can give this 'Souverainété - Personne' no more content than 'I will', the moment of arbitrariness in the will. The state-reason and state-consciousness is a unique empirical person to the exclusion of all others, but this personified Reason has no content except the abstract on, 'I will'. L'Etat c'est moi. """ from Karl Marx's Critique of Hegel's Philosophy of Right
Posted by J at 11:21 AM