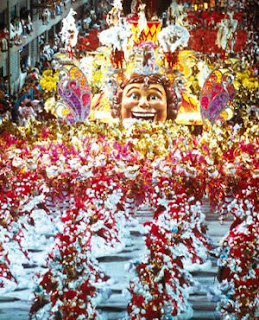 """Carnival festivities and the comic spectacles and ritual connected with them had an important place in the life of medieval man. Besides carnivals proper, with their long and complex pageants and processions, there was the 'feast of fools' (festa stultorum) and the 'feast of the ass'; there was a special free 'Easter laughter' (risus paschalis), consecrated by tradition. Moreover, nearly every Church feast had its comic folk aspect, which was also traditionally recognized. Such, for instance, were the parish feasts, usually marked by fairs and varied open-air amusements, with the participation of giants, dwarfs, monsters, and trained animals. A carnival atmosphere reigned on days when mysteries and soties were produced. This atmosphere also pervaded such agricultural feasts as the harvesting of grapes (vendange) which was celebrated also in the city. Civil and social ceremonies and rituals took on a comic aspect as clowns and fools, constant participants in these festivals, mimicked serious rituals such as the tribute rendered to the victors at tournaments, the transfer of feudal rights, or the initiation of a knight. Minor occasions were also marked by comic protocol, as for instance the election of a king and queen to preside at a banquet 'for laughter's sake' (roi pour rire)" ""


"The suspension of all hierarchical precedence during carnival time was of particular significance. Rank was especially evident during official feasts; everyone was expected to appear in the full regalia of his calling... and to take the place corresponding to his position. It was a consecration of inequality. On the contrary, all were considered equal during carnival. Here, in the town square, a special form of free and familiar contact reigned among people who were usually divided by the barriers of caste, property, profession, and age. The hierarchical background and the extreme corporative and caste divisions of the medieval social order were exceptionally strong. Therefore such free, familiar contacts were deeply felt and formed an essential element of the carnival spirit. People were, so to speak, reborn for new, purely human relations. These truly human relations were not only a fruit of imagination or abstract thought; they were experienced. The utopian ideal and the realistic merged in this carnival experience, unique of its kind""" (10).

"""Carnival imagery was used by Erasmus, Shakespeare, Lope de Vega, Guevara, and Quevedo, by the German 'literature of fools'. "Without an understanding of it, therefore, a full appreciation of Renaissance and grotesque literature is impossible. Not only belles lettres but the utopias of the Renaissance and its conception of the universe itself were deeply penetrated by the carnival spirit and often adopted its forms and symbols""".

Carne-vale, or flesh -farewell. That held for western europe until the fool-killers arrived-- i.e., calvinists, islamists, shekelsists, polack and teutonic muscle men (ie most evangelical areas banned the celebration of carnival and Lent; Mardi Gras ). What was once sacred ritual now functions as spectacle for touristas; hey bubba google up topless ho's, nawlins.

Carnival and mardi gras were not primarily ...erotic--though the erotic elements...went back to the Saturnalia, if not hellenic bacchanals (...there seems to be a puritan meme that all pagans approved of decadence and depravity,yet that's not the case. Heraclitus, for one, denounced "the shameful phallic hymns" (tho' the catholic carnival nothing like pre-christian equinotical feasts)). The carnival affirms Satire (ala satyr...); the jester wears the king's crown, the plebes becomes pope. The grotesque becomes reality, though Bakhtin may have overlooked the sordid aspects of Carnival--. Revellers often engaged in sadistic excess at the expense of workers and the poor (in Shakespeare's 12th Night, Malvolio--the attendant commoner who objects to the revellers-- has a certain stoical dignity, and Feste doesn't lack a slightly demonic aspect (and one should not confuse the play with the flicks, including Branaugh's fluff). Poe's splendid tale (however misused by lit-hacks) Cask of Amontillado also hints at some of the darker currents of Carnival...

Authori-tay was, at least for a few weeks a year, overturned, whether of state or church (and the par-tay was, in theory, sort of multicultural, at least in old europe, though probably not in the colonial nightmare zones, until much later). Bakhtin most likely had stalinist bureaucracy as one of his targets as well along with western capitalism, and his point does not lack slightly anarchistic implications...
Posted by J at 10:58 AM