Veteran's Day is to be counted, I believe, among the fairly insignificant patriotic "holidays," similiar to Labor or Memorial Day; the American Legion guys are featured in the paper wearing their nice caps with medallions; politicians appear at various veterans functions to shake hands with some grizzled old WWII infantrymen, or Shriner-like survivors of the Korean War, though we don't see the politicos too often shaking hands with the Vietnam type vets, who are, as the media would have it, all long-haired street psychotics searching for some decent bud and underground assault rifles. Solid conservative opportunities to obtain vet. photographs--photos of stern hawk-faced elders that a backwater republican congressman like Big Billy Thomas might display like trophies on a web site festooned with flags, schoolkids, and the expected rows of healthy crops or orchards--are rather slim with former Ranger-marksman turned freaks who think the local mall is "in country" and whose most profound spiritual memory is most likely of Thai or Subic Bay bar girls on a table top performing for the crew.

But words are so feeble, as are sentences and propositions, and ultimately, statistics, in terms of capturing the monumental psychopathology of war; the photographs and documentary footage present the truth far more effectively and more evocatively. Old grainy photos of dead German or French dogfaces hanging in barbed wire above trenches at the Battle of Verdun or something are as beautiful as Van Gogh's drawings of whores, perhaps more so, and the beauty is not one of artifice; it's not contrived, as most war writing and Ho-wood films seem to be. (Though having recently read Tim O'Brien's "The Things they Carried" I must say it is quite powerful).

Yet given the millions of 20th century war dead--whether soldiers, civilians, or genocide victims--it's surprising and in fact dismaying that so few pictures of the dead are to be seen in newspapers, on TV, on the web, in books. And this "corpse image control" continues presently with the Iraqi conflict: we see a few pics of blasted cities, perhaps a few graves or bodies, and the occasional beheading, but on the whole the American public does not have to endure, say, the sight of dozens of mangled bodies blown apart by a US cruise missile. This is a type of modern political injustice if not hypocrisy. It is not unreasonable to argue that the US Government, and any govt. engaging in warfare, has an obligation to show graphic pictures of death and military destruction; indeed, the war should be live and media-streamed on TV and the Net for all to see, including schoolchildren.

"[W]hen a candidate for public office faces the voters he does not face men of sense; he faces a mob of men whose chief distinguishing mark is the fact that they are quite incapable of weighing ideas, or even of comprehending any save the most elemental--men whose whole thinking is done in terms of emotion, and whose dominant emotion is dread of what they cannot understand. So confronted, the candidate must either bark with the pack or be lost... [A]ll the odds are on the man who is, intrinsically, the most devious and mediocre--the man who can most adeptly disperse the notion that his mind is a virtual vacuum. The Presidency tends, year by year, to go to such men. As democracy is perfected, the office represents, more and more closely, the inner soul of the people. We move toward a lofty ideal. On some great and glorious day the plain folks of the land will reach their heart's desire at last, and the White House will be adorned by a downright moron." 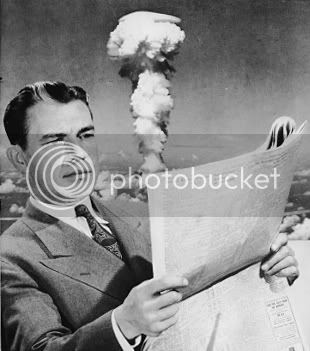 Matt Stone, one half of South Park's dynamic duo, recently uttered, "if you don't know what you're talking about, there's no shame in not voting." Matt has a point. Although Democratic or Republican party leaders could care less about the intellectual status of those who vote "their way," there is some danger in just assuming that a popular vote will result in ethical or equitable politics. Democrats surely hope that uneducated, working class types vote their way, but if the working class vote tends to go to the GOP, then perhaps the implications of Stone's comment would be more appreciated.

Ahh-nuld's (and earlier, Reagan's) popularity among the poor and working class demonstrates that voters no longer adhere to the old classifications, i.e., poor = democrat voter; wealthy = republican. In other words, requiring prospective voters to pass a poll test or possess a modicum of education might be in the Democrats' or third party's interest.

The South Park duo were denounced by Sean Penn, and this is perhaps understandable. Even Comrade Penn should be aware, however, how Stone's logic can be viewed from a democratic or leftist perspective: if voters, whether poor or wealthy, college educated or not, continually support GOP candidates, or even conservative democrats, then we should question the voting process itself. Hopefully Kerry (and dems across the US) will prove victorious over Our Chief Commanding Redneck with DT's, but if he doesn't, then Dem.s might do well to rethink their innate love of voting and "the democratic process." 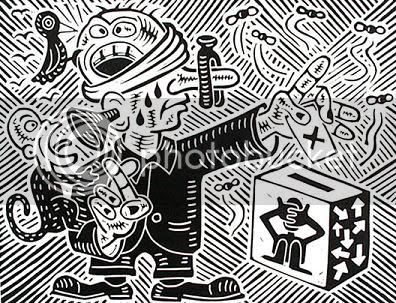 "On this week's 60 Minutes Wednesday, which features an interview with the Team America masterminds, Stone lets loose on Penn. "It's funny to take...activist actors and...elevate them to the level to what they think they are in their minds," Stone tells 60 Minutes correspondent Vicki Mabrey. "When Sean Penn is on TV before the Iraq War talking about the nuclear Non-Proliferation Treaty...that is pure comic gold. I don't care what side of the aisle you're on."

Both Stone and Parker seem to have it in for the Oscar winner. Parker told Variety last year when he announced plans to make Team America, "We hate those actors who take themselves so seriously and think they are a productive and important part of society. The subtle joke here is that all actors are puppets. This will probably piss off everyone in town--and might well be our swan song."