"There are millions of Christians who believe the Bible is literally true, word for word. Some of them—we'll come back to the question of how many— subscribe to a fantastical theology concocted in the nineteenth century by two immigrant preachers who took disparate passages from the Bible and wove them with their own hallucinations into a narrative foretelling the return of Jesus and the end of the world. Google the "Rapture Index" and you will see just how the notion has seized the imagination of many a good and sincere believer (you will also see just where we stand right now in the ticking of the clock toward the culmination of history in the apocalypse). It is the inspiration for the best-selling books in America today—the twelve novels in the Left Behind series by Christian fundamentalist and religious- right warrior Tim LaHaye, a co- founder with Jerry Falwell of the Moral Majority.

The plot of the Rapture—the word never appears in the Bible although some fantasists insist it is the hidden code to the Book of Revelation—is rather simple, if bizarre. (The British writer George Monbiot recently did a brilliant dissection of it and I am indebted to him for refreshing my own insights.) Once Israel has occupied the rest of its "biblical lands," legions of the Antichrist will attack it, triggering a final showdown in the valley of Armageddon. As the Jews who have not been converted are burned the Messiah will return for the Rapture. True believers will be transported to heaven where, seated at the right hand of God, they will watch their political and religious opponents writhe in the misery of plagues—boils, sores, locusts, and frogs—during the several years of tribulation that follow.

For them the invasion of Iraq was a warm-up act, predicted in the Book of Revelation, where four angels "bound in the great river Euphrates" will be released "to slay the third part of man." A war with Islam in the Middle East is not something to be feared but welcomed—an essential conflagration on the road to redemption. The last time I Googled it, the Rapture Index stood at 144—approaching the critical threshold when the prophesy is fulfilled, the whole thing blows, the Son of God returns, and the righteous enter paradise while sinners will be condemned to eternal hellfire." 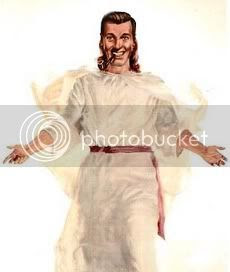 "And the day will come when the mystical generation of Jesus, by the supreme being as his father in the womb of a virgin will be classed with the fable of the generation of Minerve in the brain of Jupiter. But may we hope that the dawn of reason and freedom of thought in these United States will do away with this artificial scaffolding, and restore to us the primitive and genuine doctrines of this most venerated reformer of human errors." –Thomas Jefferson, Letter to John Adams, April 11, 1823