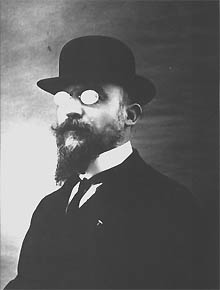 
Erik Satie was beat before beat was born. A pianist as well as humorist–at his death friends rushed in his apartment and found a stash of dozens of unused umbrellas, along with velvet suits and unknown compositions and writings—Satie was a crony of Debussy as well as the young Stravinsky and most of the other parisian freaks who partied in the cafes and brothels of Montparnasse prior to the Great War: legend has it that Satie’s protege Claude Debussy died a few minutes after hearing some of the prussian shells landing in Pa-ree. Most know some of the story: the lost generation, James Joyce trying to get his massive Aquinas-meets-Dante-in-a-Dublin ho-house Ulysses published, Einstein informing the world about the dilation of time, Freud barking about desire, Andre Breton, at least after WWI, asking real surrealists to run into the street and shoot people at random.


The world was definitely coming to an end in 1914, if not a few years before. VI Lenin, at least in early 1900s, lurked in bistro corners of Montparnasse and Montmartre, looking disapprovingly at the absinthe swilling libertines, the chess players, the artists, the hucksters. There was a lot of fluff. But the best music of Satie and of his friends Debussy and Ravel (Ravel orchestrated Satie’s 3 Gymnopedies early on) remains, and was an important influence on many 20th century composers and artists–including minimalists, jazz players and Frank Zappa.

The music of Satie is deceptively simple. Most of his pieces begin with a fairly uncomplicated theme–”without sauerkraut” he would say; i.e. free of the Germanic and Wagnerian bombast–and one might think it might be a Chopin sort of piffle, but the harmonies are then subtlely altered, inverted, 9ths and 11ths appear on top of the major and minor chords, and there are strange modulations (tho not so strange now after modern jazz): from D maj. to D dorian. Most Satie music sounds vaguely chant-like, but I suggest Satie, like Debussy is profoundly secular and agnostic and not at all some lapsed-catholic like many composers (or worse, lasped Lutherans), though there are hints of the mystical or exotic in many Satie compositions: odd modes, some from ancient Greek or oriental music appear, 5ths are flattened, one is no longer in a Paris cafe, but on some windy mongolian plain….or in an ancient pagan temple. Generally he works back towards the head, almost jazzman like , but not after going through many strange, unexpected twists
Posted by J at 6:42 PM