Illusion of free will (Grayling)

"Almost every indication from sociobiology, evolutionary psychology and neurophilosophy supports the deterministic side of the argument, entailing that our sense of being choice-makers, deliberators, option-possessors, who could have done otherwise in most of our actions, is an illusion. On the evidence flooding in from these sources, we are as other social animals, only worse off in that we operate under an enormous error theory about our own nature, falsely thinking that we have free will and that we are therefore genuinely ethical creatures. It was from this error—if it is one—that Spinoza sought to free us by arguing in his Ethics that once we recognise that we live by necessity, we cease to repine, and thus are liberated from unhappiness.

For of course the very idea of ethics premises freedom of the will. There is no logic in praising or blaming individuals for what they do unless they could have done otherwise, any more than one would praise a pebble for rolling downhill upon being dislodged by rain...." 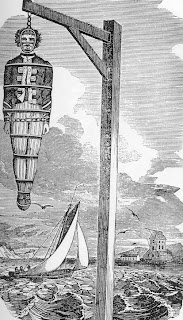 Reinforcement ware via Gibbeting, circa 1700
Posted by J at 6:53 AM

Deeep, puto. You'll see aliens when the trade unions, with Chairman BO in command, shut down the private sector--including small business. Like your fellow homeless aliens. You're the luddite, Basuraius.