PETA peoples in the house:

""""""The group People for the Ethical Treatment of Animals wants the flyswatter in chief to try taking a more humane attitude the next time he's bedeviled by a fly in the White House.

PETA is sending President Barack Obama a Katcha Bug Humane Bug Catcher, a device that allows users to trap a house fly and then release it outside.

"We support compassion even for the most curious, smallest and least sympathetic animals," PETA spokesman Bruce Friedrich said Wednesday. "We believe that people, where they can be compassionate, should be, for all animals."""""""" 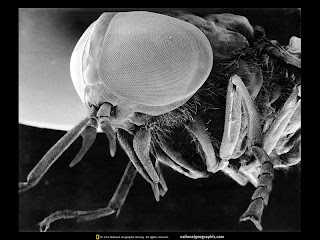 Obviously most out in Consumerland read this as another example of PETA's media politics of hysteria, but Friedrich does raise a slightly interesting point. We protest cats or monkeys used in lab experiments--rightly, in most cases. We might also object to mass-produced extermination of cattle, pork via slaughterhouse, or poultry in abattoirs, though that doesn't necessarily mean one thereby agrees to the premises of vegetarianism, or to Peter Singer-like sentimentality. The division of labor issue should be noted however. Mammals appear, prima facie, to be at least slightly sentient and not merely automatons (birds not quite as much).

Insects, however, do seem a bit less deserving of our respect than mammals. They aren't too attractive for one; instead of fur, or feathers, flies have chitin. They lack the interesting sensitive eyes that cats or cows possess. In comparison to cats or cows, they are very small. They bite, or swarm, or annoy greatly, and do not appear intelligent whatsoever but more like evolutionary mistakes. Waking up to find a massive column of fire-ants on the kitchen counters, most humans, even granola-munchers probably reach for the Raid and have no problem exterminating 10,000 or so in a few minutes. PETA reminds us that exterminating does have some spiritual consequence, however paltry it might seem. Ergo, utter a prayer, to whatever deity, or dharma may be responsible for the insect spirit world, and hopefully you don't meet some ant or fly-headed creature in the hereafter.
Posted by J at 9:35 AM

Well, here is some common ground. I am both ruthless and remorseless in the killing of hornets and spiders. Neither fly nor flea is granted any mercy.

But, then again, I eat mammals.

I would, however, draw the line at discharging Raid in the kitchen. Seems to tip risk/reward the wrong way.

I doubt you have encountered desert fire-ants, j-b. Anticide is the only solution, however brutal. I leave bees alone, and hornets alone, unless it's one of these fat green ones aiming for me head. Black widows tho' must be eradicated--the occasional scorp or sun spider as well (now whatever Designer made those puppays was definitely not working for Jeezuss). Flies aren't too much a problem.

Pork I don't do for the last few years. Beefsteak a guilty pleasure once in while. Pollo is cool. Mutton--or goat--sabroso. Taking yr date to some real mex place, southside, that has carne de cabron---yass.

Well, I was thinking of the hazard of contaminating my own food supply. But, no, I have not been in the desperate fire-ant circumstance you describe.

Nor have I ever eaten goat - that I know of. Not a menu highlight in the Great Lakes region. And I can't imagine Johnny Ray singing: "Gee, but it's great after Carne Cabron, walkin' my baby back home . . ."

Actually it's cabrito--kid goat. Yucatan-style, tho' I think it's pretty common throughout latin America--(and arabs, greeks, etc). It's close to mutton, better I think--not quite as greasy (leg of lamb tho' a fave). Ranchero style, they butcher the cabrito, and wrap in burlap, salt it down, etc. and put in a sort of earthen oven for a day. Muy sabroso, especially with the authentic yucatan style cuisine, maybe some Dos x, a shot of patron. A bit much for Betty or Veronica but mo' exotic brands of dates--Ezmeraldissima-- tend to enjoy it.

I'm not big on lamb, so this might not have a lot of appeal. Would depend on seasonings, etc.

I am fairly adventurous though. and would try it if I had the chance.

I did not mean to suggest goat as ordinary fare (though it is in many areas of El Mundo), j-b. Yucatan or carib. style mexican food is a once or twice a year indulgence.


Done carib. style the goat-meat's slow-roasted, and seasoned, served with all sorts of stuff (some seafood, "mole", etc, fried plantains--tejadas, I think). Not too gamey: 'tastes like chicken" as they say.


6 comments. The goat thread's about exhausted-- On unfogged they'd have 600 plus, with recipes and anecdotes from every college town freak (and freakette) in the Ewe Ess Hay.

Now back to trabajo.