""""So take right now, for example, there is a right-wing populist uprising. It's very common, even on the left, to just ridicule them, but that's not the right reaction. If you look at those people and listen to them on talk radio, these are people with real grievances. I listen to talk radio a lot and it's kind of interesting. If you can sort of suspend your knowledge of the world and just enter into the world of the people who are calling in, you can understand them. I've never seen a study, but my sense is that these are people who feel really aggrieved. These people think, "I've done everything right all my life, I'm a god-fearing Christian, I'm white, I'm male, I've worked hard, and I carry a gun. I do everything I'm supposed to do. And I'm getting shafted." And in fact they are getting shafted. For 30 years their wages have stagnated or declined, the social conditions have worsened, the children are going crazy, there are no schools, there's nothing, so somebody must be doing something to them, and they want to know who it is. Well Rush Limbaugh has answered - it's the rich liberals who own the banks and run the government, and of course run the media, and they don't care about you—-they just want to give everything away to illegal immigrants and gays and communists and so on.

Well, you know, the reaction we should be having to them is not ridicule, but rather self-criticism. Why aren't we organizing them? I mean, we are the ones that ought to be organizing them, not Rush Limbaugh. There are historical analogs, which are not exact, of course, but are close enough to be worrisome. This is a whiff of early Nazi Germany. Hitler was appealing to groups with similar grievances, and giving them crazy answers, but at least they were answers; these groups weren't getting them anywhere else. It was the Jews and the Bolsheviks [that were the problem]. 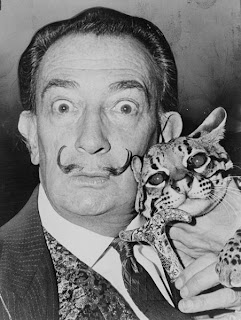 Sal Dali and his pet Ocelot


I mean, the liberal democrats aren't going to tell the average American, "Yeah, you're being shafted because of the policies that we've established over the years that we're maintaining now." That's not going to be an answer. And they're not getting answers from the left. So, there's an internal coherence and logic to what they get from Limbaugh, Glenn Beck, and the rest of these guys. And they sound very convincing, they're very self-confident, and they have an answer to everything—a crazy answer, but it's an answer. And it's our fault if that goes on. So one thing to be done is don't ridicule these people, join them, and talk about their real grievances and give them a sensible answer, like, "Take over your factories."""""

Prof. Chomsky may be a bit too optimistic, but there's another reason his analyses tend to bother the frat boy or sorority gal liberal democrats, or the postmodernist left (not to say Ditto-heads, and Glenn Beck-Fox bots): he discusses the ......L-word, aka Labor. The frat-boy liberal democrat generally has little or no interest in, nor understanding of labor, or work-related issues, or the plight of the working class--including the caucasian working class. Problems related to the division of labor--a common theme in political and economic discussions of the 19th century--don't generally concern cyber-crats (or the academic leftist). The typical liberal Demo. no longer punches the clock in factory or field. She works for management, in office jobs, or belongs to the schoolmarmies or cop union. Unionists may still be found in the urban areas (not that trade unions are always correct), but the college-educated suburbanites and "professionals" outnumber them.

Burbs-o-crats don't know what the IWW was (is that some horrid Dylan tune or Steinbeck story or something?....dreadful). They have not read Bakunin, or even Bertie Russell; perhaps a few burbs-o-crats read Orwell, or even Pynchon, but the political implications of TP novels have been barely addressed in Lit-land. Allude to any marxist jargon to burbs-o-crats and they think Stalin (or Hitler, or worldwide zionist conspiracy, gays, Rosie O, whatever)--or reach for their revolvers, or favorite Aynnie Rand Twatboiler. Chomsky's sort of quasi-Bakunin abstractions--and rationality--are too much for them. The teabaggers listening to ReichMommy Palin, or FoxCo, the neo-cons AND the leftists who hate them agree on one common machiavellian principle, however: just win, bay-be.
Posted by J at 8:03 AM

I've heard it said that a liberal is someone who won't take his own side in an argument. Left embrace of the teabag is, imo, more of this. It's a road that leads nowhere.

Perhaps, but traditional leftism, (rather than suburban liberalism, or professionalism) if you will, did insist on working class solidarity, even when the working class tended toward nationalism , or religious fundamentalism, etc. The teabaggers might be conservative, anti-darwinist ..er yokels, but they generally are working class (not always--some appear to be small business types).

Chomsky at least knows a bit about 20th century history. When the left, or so-called PC liberals refuse to acknowledge the grievances of certain groups--poor rural whites in this instance, or hispanics, whoever--they might just go tea-bag, or attempt to recreate NSDAP and the brownshirts. The working class turns right, if not... fascist (Im not fond of the F-word, but sometimes it applies). Something similar to that occurred in the spanish civil war as well: the republicanos (the anarchists, actually: not "republican" in Merican sense) fought hard against the royalists and fascists, but when the soviet stalinists arrived and started with their police state tactics, some republicanos joined Franco.

Chomsky's astute, or at least sincere, unlike most hackademics. We might not agree, and one could argue for silencing the idiotic right (or left, for that matter), instead of placating the tea-bagger or dime-baggers. But NC does provide a different view of current politics, usually sort of reasonable, rather than rage-fueled (really, some leftists can be as hysterical as religious fundamentalists...)

My scribblings tho' are neither astute nor sincere nor overly reasonable (though usually...verifiable to some degree), but something like a Ren and Stimpy marathon--yet as the poet Iggy Pop once yelped, ain't got time to make no apologies....