The spirit of PERVERSENESS

"In the meantime the cat slowly recovered. The socket of the lost eye presented, it is true, a frightful appearance, but he no longer appeared to suffer any pain. He went about the house as usual, but, as might be expected, fled in extreme terror at my approach. I had so much of my old heart left, as to be at first grieved by this evident dislike on the part of a creature which had once so loved me. But this feeling soon gave place to irritation. And then came, as if to my final and irrevocable overthrow, the spirit of PERVERSENESS. Of this spirit philosophy takes no account. Yet I am not more sure that my soul lives, than I am that perverseness is one of the primitive impulses of the human heart --one of the indivisible primary faculties, or sentiments, which give direction to the character of Man. Who has not, a hundred times, found himself committing a vile or a silly action, for no other reason than because he knows he should not? Have we not a perpetual inclination, in the teeth of our best judgment, to violate that which is Law, merely because we understand it to be such? This spirit of perverseness, I say, came to my final overthrow. It was this unfathomable longing of the soul to vex itself --to offer violence to its own nature --to do wrong for the wrong's sake only --that urged me to continue and finally to consummate the injury I had inflicted upon the unoffending brute. One morning, in cool blood, I slipped a noose about its neck and hung it to the limb of a tree; --hung it with the tears streaming from my eyes, and with the bitterest remorse at my heart; --hung it because I knew that it had loved me, and because I felt it had given me no reason of offence; --hung it because I knew that in so doing I was committing a sin --a deadly sin that would so jeopardize my immortal soul as to place it --if such a thing were possible --even beyond the reach of the infinite mercy of the Most Merciful and Most Terrible God. 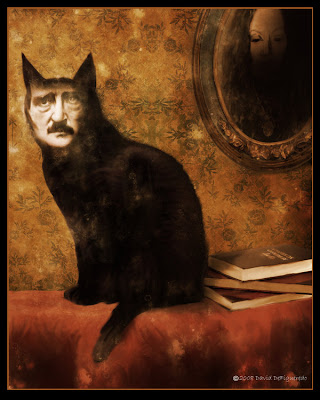 The Black Cat reveals Poe's great talent at evoking a mood of near-hysterical terror in a few dozen tightly composed paragraphs. The Black Cat might not rank as one of his classic tales--the plot seems a bit contrived--yet anyone who reads the story carefully can hardly not be affected by Poe's complex rhetoric of pathology and psychosis. Poeian syntax itself sounds like eloquent terror, vaguely shakespearean perhaps: Poe's narrators may remind one of Iago, with his gallows humor and puns, though with a peculiarly American edge. Poe however is no noir hack working from police reports or criminal depositions, or working class slang: he wrote before the Victorian dialect-masters arrived (whether Dickens, or Twain, etc). Poe arguably invented the ghoulie genre itself, with the loquacious villains (as Vincent Price, and earlier Karloff), and strange clockwork mechanisms and objects. Poe also initiated the detective story, if not sci-fi as well--that scary dream The Masque of the Red Death gave birth to Lovecraft (who routinely blesses his master EAP), and probably Harlan Ellison as well.

One interesting aspect of the story concerns the narrator's insistence (do not merely read that as Poe himself) that his phantasm cannot be accounted for, as of by yet, by an "ordinary succession of very natural causes and effects."
The narrator is not merely a deranged psychotic, but he believes his Spirit of PERVERSENESS exists in some psychological realm which Reason cannot at present address. Reason--including science and logic-- cannot describe the primitive impulses of the human heart --yet for the Narrator (and Poe, one suspects) that Spirit comprises "one of the indivisible primary faculties, or sentiments, which give direction to the character of Man." The narrator's obsession with Pluto alludes to the ambiguity of motivation, or in contemporary terms, the problem of intentionality.

Black cats typically connote malfeasance, night, or witchcraft; cats were often killed along with suspected witches in the middle ages. In Poe's tale, the Narrator has given the name Pluto to his black cat: Pluto, god of the underworld. Jung would most likely have termed the Black Cat an archetype, and that seems in ways preferable to Freud's dream-maps, thought they both agreed that cats symbolized the feminine as well as sexuality. Pluto adds the dimension of death. The black cat lore may seem trite and "gothic" now, but in many cultures, even primitive America, a black cat was a portentous Omen, especially to the religiously orthodox. The narrator himself may be religious, possibly a zealot, given his concerns about "the Most Merciful and Most Terrible God". Could the Narrator, by torturing and then killing the cat--and then his wife--be combating what he interprets as the presence of Evil, driven by his own unconscious, sublimated religious code? That seems plausible, though a thorough explanation would require a more detailed analysis; suffice it to say, the narrator is obsessed with the cat. The Cat indeed equals the Spirit of PERVERSENESS to the narrator; the spirit being both manifest in the Cat, AND in the Narrator's mind--a type of immanence, really, which an "ordinary succession of very natural causes and effects" cannot account for. The Narrator-cat relation then becomes nearly a type of psychological pantheism (and human-primates and felines both belong to the order of Mammals). The cat serves as a symbol of something out of the ordinary, uncanny, troubling--even an Other of sorts, in Lacan-Speak-- to the narrator, and he must destroy it, yet it is part of him. By destroying the Cat, he will destroy the Spirit of PERVERSENESS itself...(to be continued)
Posted by J at 9:34 AM

Baudelaire (an ardent admirer of Poe, as you may know) wrote in his intimate journals that hoi polloi hates cats because they're beautiful, because they're (and now I'm quoting one of his poems) amis de la volupté--friends of sensual ecstasy.

I wish I had a black cat.

Merci boo-coo. I attempt something serious (and literary) about once every 3 months...

Yes, I tried to touch on that--the cat as mystery, with a hint of paganism (and death itself)--the spirit of perverseness, as the narrator says. And named Pluto...

I rather fancy the old Vinnie Price Poe flicks as well, even tho' they seem sort of cheesy and hammy to some.

The old classic Black Cat flick with Carloff and Lugosi (I scribbled something on that as well) has little or nothing to do with the EAP tale, but is interesting nonetheless (not to say exquisitely sinister at the end)....

you dare to play chess with me, for ...her? bwah bwahbwah

I've read a bit of Lovecraft--I have the collection "The Tomb". His ornate style impresses (he had read his EAP), as does the dreamy haunted scenery...but Im not so down with him when he dregs up ghoulies from the deep and so forth...