And J.J. says (History of Ireland, via Ulysses, Episode 12, Cyclops)

We know those canters, says he, preaching and picking your pocket. What about sanctimonious Cromwell and his ironsides that put the women and children of Drogheda to the sword with the bible text "God is love" pasted round the mouth of his cannon? The bible!....""

Cromwell at Droghedam aka Protestant orthodoxy, applied (google it yrself, vatos). We suggest Cyclops(if not Ulysses as a whole) be read as a fairly non-bemuddled examination of Joyce's own politics, which are not quite as PC as many a modern muckademic might read them. While perhaps not marching in step with Sinn Fein, Joyce certainly detested the Brits, and loyalists (and Cyclops offers an interesting abundance of irish pub dialect---). Cyclops also features Leopold Bloom vs the Citizen, or pragmatic businessman-huckster opposing the radical politics of his day (tho' is the Citizen a Robespierre? or perhaps bolshevik or brownshirt). Perhaps Bloom is the real Cyclops.

Joyce it should be recalled was pals with Pound, Ezra, though some reports indicate he objected to the blackshirted Pound of the 30s. Guar-ann-teed to scare the bejeezuss out of the usual clueless WASP Cliff Clavin, even ones who consider Richie Dawkins a real deep intellectual. Darwinism precludes tragedy, whether read in religious terms or humanist; a reductionist simply won't understand Stephen Daedulus, Leopold Bloom, or his curious dark creature Molly B***m. 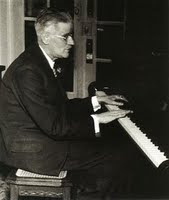 """ His ear for rhythm was infallible. This is a very different thing from an ear for music. According to the French poet, José Maria de Herèdia, “La musique des poètes n’a aucun rapport avec la musique des musiciens.” Joyce was one of the comparatively few poets who were musical in the musician’s sense. Yeats was tone deaf; so by deduction was Byron; so was Burns; but Joyce was gifted with a double ear, exquisite in both faculties. His first volume of poetry, Chamber Music, is one proof. The other is his success as a singer.

Strange, almost incredible as it may seem now to his admirers, Joyce was more intent on becoming a singer than a writer. Although he competed at the Feis long before he conceived Ulysses, he was devoted all his life to music. This is borne out by the story of Joyce’s projection of himself into the person of Denis Sullivan, a prominent Irish-American tenor of the beginning of the century.""""
Posted by J at 12:03 PM

Sometimes I ask myself: Why do I employ a homicide wholesaler? Is it wrong?