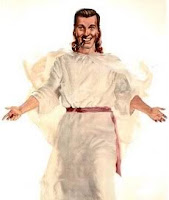 --I have insufficient evidence to believe miracles like resurrections happen today and I do not have better evidence for miracles in the past than I have for their absence in the present.

--Therefore, I have insufficient evidence to believe miracles like resurrections happened in the past.


This argument is valid and sound, and its conclusion would logically encompass all particular cases like Jesus (and would encompass all alleged miracles of the Old and New Testaments, and Koran, Richie)."""

A dissenting view
Posted by J at 9:58 AM

It all depends what counts as evidence, doesn't it? And that just means, what makes it evident to the person for whom it matters.

More honest than "I have insufficient evidence" would be "No evidence has persuaded me." And I think this makes a difference for the validity of the syllogism, which depends on 1) The possibility of ownership of evidence ("I have..."), and 2) The quantifiability of this evidence ("insufficient...better"). But if persuasion is not reciprocal with a quota of substantial, graspable evidence (and why should it be?), nothing follows.

Good point. and I agree it's a bit subjective. It's a valid syllogism, but the premises are not really necessarily true, are they--more like a statement of evidentialism. Or rather, something could be the case, whether there was insufficient evidence or not; a jury might say there was insufficient evidence to find X guilty, but that doesn't in itself prove he's innocent...even fingerprints, DNA or a "smoking gun" don't always establish guilt. It's rather difficult to quantify or establish a criteria for evidentiary proof--(that also means that the supposedly guilty, might not always be...wrongful conviction a possibility)

That said, Carrier's point is fairly close to Hume's reasoning contra-miracles. Having never seen miracles (say, the dead coming back to life) humans presume the uniformity of experience, and consider alternative explanations, question the reliability of the testimony. Which also entails that ancient texts which contain reports of supernatural events (whether Bible, koran, hindu, pagan, etc) should not be considered authoritative, ie inerrant--the historical point. I respect some of the wisdom of the New Testament (say, the Sermon on the Mount)--yet reading say the strange visions of the Book of Revelation--"the ravings of a maniac," said Jefferson--I have a different reaction. So I would say Carrier's argument here is strongly cogent.

But it's certainly possible Carrier's...wrong.
The empty tomb issue is sort of interesting--tho' as with any historical issue, we can't really say the Res. did happen, even more likely than not. Historians argue over specific details of a WWII battle;a fortiori, establishing the specific details from the time of Tiberius poses greater difficulties.

IN a sense a purely historical approach to religion seems misguided (there were I believe groups of clerics who protested the historical approach to biblical scholarship--what's more, the docetist heresy also posed an interesting question; JC appears to be a supernatural being--walks on water--raised the dead--, so why do we feel sorrow/misery??? The typical sunday schoolers scoff at that , but I think it's a powerful point: couldn't JC at any time break free from the cross, etc? Why didn't JC decide to manifest himself over the Roman senate, or turn into a cloud of butterflies, etc?? Once one grants supernatural powers--Christ as Neo!-- it seems anything follows...)