The Inequality That Matters--
Tyler Cowen:

""The numbers are clear: Income inequality has been rising in the United States, especially at the very top. The data show a big difference between two quite separate issues, namely income growth at the very top of the distribution and greater inequality throughout the distribution. The first trend is much more pronounced than the second, although the two are often confused.

When it comes to the first trend, the share of pre-tax income earned by the richest 1 percent of earners has increased from about 8 percent in 1974 to more than 18 percent in 2007. Furthermore, the richest 0.01 percent (the 15,000 or so richest families) had a share of less than 1 percent in 1974 but more than 6 percent of national income in 2007. As noted, those figures are from pre-tax income, so don’t look to the George W. Bush tax cuts to explain the pattern. Furthermore, these gains have been sustained and have evolved over many years, rather than coming in one or two small bursts between 1974 and today.1 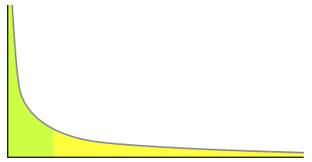 These numbers have been challenged on the grounds that, since various tax reforms have kicked in, individuals now receive their incomes in different and harder to measure ways, namely through corporate forms, stock options and fringe benefits. Caution is in order, but the overall trend seems robust. Similar broad patterns are indicated by different sources, such as studies of executive compensation. Anecdotal observation suggests extreme and unprecedented returns earned by investment bankers, fired CEOs, J.K. Rowling and Tiger Woods.

At the same time, wage growth for the median earner has slowed since 1973. But that slower wage growth has afflicted large numbers of Americans, and it is conceptually distinct from the higher relative share of top income earners. For instance, if you take the 1979–2005 period, the average incomes of the bottom fifth of households increased only 6 percent while the incomes of the middle quintile rose by 21 percent. That’s a widening of the spread of incomes, but it’s not so drastic compared to the explosive gains at the very top.""

Another chapter from....Life in  Casino America.


""The broader change in income distribution, the one occurring beneath the very top earners, can be deconstructed in a manner that makes nearly all of it look harmless. For instance, there is usually greater inequality of income among both older people and the more highly educated, if only because there is more time and more room for fortunes to vary. Since America is becoming both older and more highly educated, our measured income inequality will increase pretty much by demographic fiat. Economist Thomas Lemieux at the University of British Columbia estimates that these demographic effects explain three-quarters of the observed rise in income inequality for men, and even more for women.2

Attacking the problem from a different angle, other economists are challenging whether there is much growth in inequality at all below the super-rich. For instance, real incomes are measured using a common price index, yet poorer people are more likely to shop at discount outlets like Wal-Mart, which have seen big price drops over the past twenty years.3 Once we take this behavior into account, it is unclear whether the real income gaps between the poor and middle class have been widening much at all. Robert J. Gordon, an economist from Northwestern University who is hardly known as a right-wing apologist, wrote in a recent paper that “there was no increase of inequality after 1993 in the bottom 99 percent of the population”, and that whatever overall change there was “can be entirely explained by the behavior of income in the top 1 percent.”4

And so we come again to the gains of the top earners, clearly the big story told by the data. It’s worth noting that over this same period of time, inequality of work hours increased too. The top earners worked a lot more and most other Americans worked somewhat less. That’s another reason why high earners don’t occasion more resentment: Many people understand how hard they have to work to get there. It also seems that most of the income gains of the top earners were related to performance pay—bonuses, in other words—and not wildly out-of-whack yearly salaries.5

It is also the case that any society with a lot of “threshold earners” is likely to experience growing income inequality. A threshold earner is someone who seeks to earn a certain amount of money and no more. If wages go up, that person will respond by seeking less work or by working less hard or less often. That person simply wants to “get by” in terms of absolute earning power in order to experience other gains in the form of leisure—whether spending time with friends and family, walking in the woods and so on. Luck aside, that person’s income will never rise much above the threshold.

It’s not obvious what causes the percentage of threshold earners to rise or fall, but it seems reasonable to suppose that the more single-occupancy households there are, the more threshold earners there will be, since a major incentive for earning money is to use it to take care of other people with whom one lives. For a variety of reasons, single-occupancy households in the United States are at an all-time high. There are also a growing number of late odyssey years graduate students who try to cover their own expenses but otherwise devote their time to study. If the percentage of threshold earners rises for whatever reasons, however, the aggregate gap between them and the more financially ambitious will widen. There is nothing morally or practically wrong with an increase in inequality from a source such as that.

The funny thing is this: For years, many cultural critics in and of the United States have been telling us that Americans should behave more like threshold earners. We should be less harried, more interested in nurturing friendships, and more interested in the non-commercial sphere of life. That may well be good advice. Many studies suggest that above a certain level more money brings only marginal increments of happiness. What isn’t so widely advertised is that those same critics have basically been telling us, without realizing it, that we should be acting in such a manner as to increase measured income inequality. Not only is high inequality an inevitable concomitant of human diversity, but growing income inequality may be, too, if lots of us take the kind of advice that will make us happier.
Posted by J at 12:33 PM