"...Yes it turns out that late Frank Zappa, the restless musical genius who may have been the most committed inconoclast in the history of rock, was a pal to the late Jack Kirby, the cosmic dreamer who is arguably the second most essential figure in the history of the American comic book. (You have to put Superman at first.)

I remember seeing a vintage 1968 issue of “Fantastic Four” that had an ad for “We’re Only in It for the Money,” the new album from the Zappa and the Mothers of Invention, and it surprised me because it seemed like an unexpected crossover moment between counter-culture music and the Marvel universe. Both were popular on college campuses, of course, but seeing the gaudy little blurb (“Thrilling clean fun!” it promised) still made me smile and think about the sweet confusion of a young first-time Zappa listener trying to get his head around the album. If you don’t know it, it’s a masterpiece of cultural satire and heady music with Zappa’s smirking wit at every corner — the titles include, “What’s the Ugliest Part of Your Body,” “Hot Poop,” “Who Needs the Peace Corps?” and the mad-laughter finale “The Chrome Plated Megaphone of Destiny.” ..."

warning...may be offensive to any/all descendants of the ancient psychotic Ibrahim ) 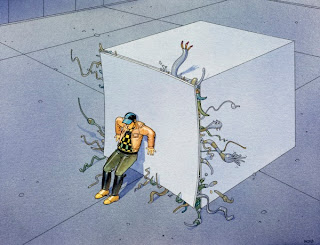