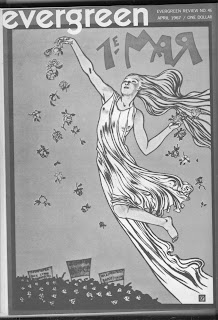 “”"That bank-tax reported yesterday looks like it will be
broader and tougher than initially reported.

The Huffington Post quotes a senior administration official saying that Obama will institute a tax not only to recoup taxpayer losses on the bailouts but also to penalize too-big-to-fail institutions and get back some of the taxpayer subsidy inherent in guaranteeing these firms’ survival.

That tax, if it’s steep enough, will incentivize banks to get smaller. It will be interesting to see how it’s structured—at what size the levy kicks in.

And this is also important and new: It appears the administration, even if it’s not going to call for the reinstatement of a Glass-Steagall split between trading and banking, is going to slap penalties on casino-like activities”

The neo-liberals (and of course the neo-Nixonian GOP-nutbags) don't seem too enthralled about this move, but it appears to be a fairly sound regulatory policy--though probably a bad sign for scabs and shysters, whether Stevie Jobs, or Stevie Forbes, or McJobs-Forbes-wannabes, like Byronia and the mormon-subluxation biz.
Posted by J at 4:01 PM

Byronia and the mormon-subluxation biz

This punk "byronius" has posted on Crooks and Liars and other leftist sites, trying to pretend he's some big radical. What a joke. No real leftist would trade on Steve Forbes' name. He should be outed.

B.'s far too deranged and delusional to understand that real Democrats (not synonymous with DINOcrats, or Pelosicrats) don't approve of...well.. Forbes, Ahhnuld, 'roids, or the Mormon-bots, etc.

Regardless, the Big B.'s managed to convince, like, a dozen or so DINOs that's he's a ...liberal!--even though he and his boyfriend Max regularly praise NASA, RA Heinlein ('Nam hawk, Nixonian, and McCarthyite, regardless what a few freaks say), Forbes, capitalism, Winston Churchill, etc etc.

The New Worlds crew has been outed in some places--like DU and KOS, where they're troll-rated. That's hardly enough: they need to be somewhere away from the public (and the Net)--like Vacaville.

I scrolled through a few posts of this punk "byronius". Sounds like a loud piece of white trash: sort of Toby Keith pretending to be a liberal. He linked to Forbes, and to Andrew Sullivan, a gay republican. Then claims to hate republicans.

And you're right about "Byronius": Toby Keith, like on crack. Tho' not quite as bright as even Toby.

He and his spouse, a daughter of some Chevron exec. (and as conservative as her rich WASP father, but lies about it) actually campaigned for Schwarzenegger, dissed Davis and the Dems. After 9-11, when the KOS fun got rolling, they put on the big hysterical liberal act.

Can we say---lavender marriage? yass.

And get this: they're in some conservative, fundamentalist church in Sacto, and the Big B. --Tobyius!-- also associates with mormons.

A complete f-ing joke--and the mentally ill webmaster, Max, allows this clown to spew his garbage every day.