"""When Hegel speaks of “the State” he does not mean every state encountered in experience. Immediately after first offering his epigram about the rational and actual, he himself continued:

What matters is this: to recognize in the semblance of the temporal and transient the substance which is immanent and the eternal which is present in it. For the rational (which is synonymous with the Idea), in its actuality, also embeds itself in external existence and thus manifests itself in an infinite wealth of forms, appearances, and figures, shrouding its core in a multi-colored rind. Our consciousness first dwells on this rind, and only after that does philosophic thinking penetrate it to detect the inward pulse and to perceive its beat even in the external forms. The infinitely varied relations, however, which take shape in this externality ... this infinite material and its organization are not the subject matter of philosophy.

Thus Hegel would distinguish between the Idea of the State, which he means when he speaks of “the State,” and the many states around us. But the Idea, he claims, does not reside in a Platonic heaven, but is present, more or less distorted, in these states. The philosopher should neither immerse himself in the description and detailed analysis of various historical states, nor turn his back on history to behold some inner vision: he should disentangle the rational core from the web of history.

Hegel is not driven to “juridical positivism” and the approbation of every state with which he is confronted, as Popper supposes (p. 252 ): he can pass judgment. Hegel makes a sharp distinction between such philosophic judgment and the arbitrary criticisms that reflect personal idiosyncrasies and prejudices. This would not involve any difficulty if he were willing to restrict himself to internal criticism, pointing out the multifarious inconsistencies that are so striking in the utterances of most statesmen, in the platforms of most parties, and in the basic convictions of most people. Hegel, however, goes further.

He believes in a rational world order and in his ability to understand it. For him, life is not “a tale told by an idiot”; and history, not merely, although also, a succession of tragedies. There is an ultimate purpose — freedom — and this furnishes a standard of judgment.

A few quotations from the Philosophy of Right may illustrate this. “One may be able to show how a law is completely founded in, and consistent with, both circumstances and existing legal institutions, and yet is truly illegitimate and irrational” (§3). Hegel also speaks of “unalienable” rights and condemns, without qualification,
slavery, serfdom, the disqualification from holding property or the prevention of its use or the like, and the deprivation of intelligent rationality, of morality, ethics, and religion, which is encountered in superstition and the concession to others of the authority and full power to determine and prescribe for me what actions I am to perform ... or what duties my conscience is to demand from me, or what is to be religious truth for me [§66].

According to the addition of Gans, the editor, Hegel remarked in his lectures in this connection that “the slave has an absolute right to liberate himself” (cf. also §77).

Hegel is not inconsistent when he writes: “the State cannot recognize conscience [Gewissen] in its peculiar form, i.e., as subjective knowledge [Wissen], just as in science, too, subjective opinion, assurance, and the appeal to subjective opinion have no validity” (§137). Conscience is fallible; and, while no government or church has the right to dictate to our conscience, no government can afford to recognize conscience as a legal standard. As several of his interpreters have pointed out, Hegel, when he wrote the Philosophy of Right, was concerned about the recent assassination of the poet Kotzebue by a student who was convinced that the poet was a Russian spy and deserved death.

We are bound to misunderstand Hegel when we apply his remarks about conscience within the framework of the Nazi state. It would be more pertinent if we thought of the German Republic before 1933 and of the conscience of Hitler. For by “the State” Hegel means one in which freedom is realized and “a human being counts because he is a human being, not because he is a Jew, Catholic, Protestant, German, Italian, or the like” — and this “is of infinite importance” (§209; cf. §270 n.). Hegel would consider rational the conscience of an opponent of Hitler who recognized his own absolute right to make himself free and to realize his unalienable rights — but not the conscience of a fanatic impelled by personal motives or perhaps by an equally objectionable ideology.

It is no wonder that the Nazis found small comfort in a book that is based on the conviction that “the hatred of law, of right made determinate by law, is the shibboleth which reveals, and permits us to recognize infallibly, fanaticism, feeble-mindedness, and the hypocrisy of good intentions, however they may disguise themselves” (§258 n.). In his Preface, too, Hegel called the law “the best shibboleth to distinguish the false brothers and friends of the so-called people.” One may agree with Herbert Marcuse when he says in Reason and Revolution: Hegel and the Rise of Social Theory: “There is no concept less compatible with Fascist ideology than that which founds the state on a universal and rational law that safeguards the interests of every individual, whatever the contingencies of his natural and social status” (pp. 180 f.).

In sum: Popper is mistaken when he says, like many another critic, that, according to Hegel, “the only possible standard of judgment upon the state is the world historical success of its actions” (p. 260 ). Success is not the standard invoked in the Philosophy of Right when Hegel speaks of “bad states.” “The State” does not refer to one of “the things in flux,” but to an Idea and a standard of judgment, to what states would be like if they lived up fully to their raison d'être. This reason is to be found partly “in a higher sphere” (§270) for which Hegel himself refers the reader to his system as outlined in his Encyclopaedia. The whole realm of Objective Spirit and human institutions that culminates in the State is but the foundation of a higher realm of Absolute Spirit that comprises art, religion, and philosophy. 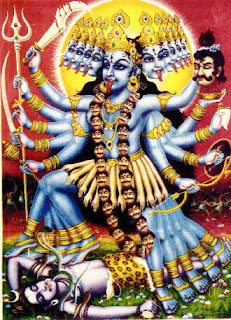 A perplexing Plurality of Nows

The discussion of “the State” in the Philosophy of Right opens with the pronouncement: “The State is the actuality of the ethical idea.” If he were a Platonist, he would mean justice; but Hegel means freedom: not that freedom from all restraints which, at its worst, culminates in anarchy, license, and bestiality, but, rather, man’s freedom to develop his humanity and to cultivate art, religion, and philosophy. He considers the State supreme among human institutions because he would subordinate all such institutions to the highest spiritual pursuits and because he believes that these are possible only in “the State.” He himself says: “To be sure, all great human beings have formed themselves in solitude — but only by assimilating what had already been created in the State."[1] One might nevertheless insist, as Hegel does not, that conformity should be discouraged beyond the necessary minimum, and one might dwell, as Nietzsche did half a century later, on the dangers of the State.

It would be absurd to represent Hegel as a radical individualist; but it is equally absurd to claim, as Popper does (p. 258 ), that Hegel’s State is “totalitarian, that is to say, its might must permeate and control the whole life of the people in all its functions: ‘The State is therefore the basis and center of all the concrete elements in the life of a people: of Art, Law, Morals, Religion, and Science.'” Popper’s claim simply ignores Hegel’s emphatic insistence on the sphere of “subjective freedom,” which he himself considered a decisive advance over Plato. The quotation from Hegel, of course, does not at all prove the preceding contention: it means — and the context in the lectures on the Philosophy of History (Preface) makes this quite clear — that the State alone makes possible the development of art, law, morals, religion, and science. And Hegel’s formulation here shows less the influence of Plato, whom Popper represents as a terrible totalitarian, than the impact of Pericles, whom Popper admires. The sentence Popper quotes could almost come from Thucydides’ version of Pericles’ most famous speech.

Hegel’s philosophy is open to many objections, but to confound it with totalitarianism means to misunderstand it. Ernst Cassirer puts the matter very clearly in The Myth of the State (1946), a book dealing with much the same material as Popper’s, but in a much more scholarly manner. His Hegel chapter ends: “Hegel could extol and glorify the state, he could even apotheosize it. There is, however, a clear and unmistakable difference between his idealization of the power of the state and that sort of idolization that is the characteristic of our modern totalitarian systems.”""""

To reiterate: "But the Idea, he claims, does not reside in a Platonic heaven, but is present, more or less distorted, in these states. The philosopher should neither immerse himself in the description and detailed analysis of various historical states, nor turn his back on history to behold some inner vision: he should disentangle the rational core from the web of history."

Das stimmt. The Hegelian Idea: Guar-ann-teed to spook a baptick-mason, altar boy, monarchist (let's not forget Hegel supported the American AND French Revo., in principle) or sundry mystics and boodhistas. Yet hegelian dialectic should not be mistaken for a type of dogma, a replacement for...religion; it's a conceptual model,as Marxy Marx himself realized (though many of his followers didn't), and as a history-based model, it may have certain advantages to say, Darwinism, though tan romantico for most bottlewashers (or sunday schoolers, for that matter). Contingencies fans should also note Kaufmann's rather astute observation that Hegel is not merely a will-to-power type, as many a naive liberal has been taught: ""Popper is mistaken when he says, like many another critic, that, according to Hegel, “the only possible standard of judgment upon the state is the world historical success of its actions”"".

Bertrand Russell most likely echoed Popper's error as well--assuming the Hegelian system was merely a type of Caesarism, and a template for the Third Reich (tho' his anti-Hegel rant in History of West.Phil perhaps not uncalled for, given that the V-2s were flying and concentration camps rolling). Not exactly, Uncle Bertie: Hegel promoted a kinder, gentler Caesarism, though the Philosophy of Right or Phil of History will not offer much comfort to the usual liberal narcissist or anglo-progressive. Alas Caesars, ethical or not, are in short supply (apart from perhaps...Berscaloni)
Posted by J at 10:54 AM