"Agora,” bristling with ideas and topical provocations, unfolds in a world of togas, sandals and high-flown language, a setting that might lead you to expect camp, classicism or “Gladiator.” What you get, at least in the early scenes, is the story of three young men with a crush on their science teacher. Her name is Hypatia, she is a noblewoman in the Egyptian city of Alexandria — it’s the fourth century A.D., by the way — and since she is played by Rachel Weisz, you can hardly blame them. Hypatia, who is based on a historical figure, pursues the mysteries of the cosmos with dogged dialectical skill and is regarded throughout the city with admiration and awe. One of her slaves, Davus (Max Minghella), visibly pines for her, as does a shy pupil named Synesius (Rupert Evans), and one much less shy named Orestes (Oscar Isaac), who propositions her in the famous library of Alexandria, which she directs. Later he makes a public declaration of his love, and she responds by presenting him with a handkerchief stained with her menstrual blood, a rejection much more blunt than any text message."""


click here for primary sources on the life of Hypatia, as opposed to hype. Guar-ann-teeed to scare monotheistic cowboys of all stripes (ie, christian, jewish, and/or muslim) 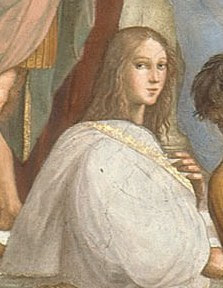 Hypatia, in Raphael's School of Athens

From the Comments: """This isn't Gladiator, obviously, or even I, Claudius or Rome (HBO) Instead, its a fairly accurate depiction of a time period that is little known outside academia, for many reasons. Most well educated non-specialists will know many of the key events in Roman history, but most people probably think that Alexandria's importance ended when Cleopatra met the asp. In fact, this fascinating city continued to be a scientifc, literary, and even theological center of the antique world until the conquest of the Arab armies transfered political power in Egypt to Cairo. What people know even less about is how Christianity actually "triumphed", not so much with the Conversion of Constantine, who's championship of the new religion hardly made it preeminent, but with a sudden and horrifically violent series of upheavals (one might even hazard to call them, "persecutions") in which the newly theocratic state sought to make Christianity not only the most favored, but the ONLY religion permitted in the Empire, with the possible exception of the Jews, who, it was thought, must continue to exist in abject suffering, so that they might bear witness to the triumph of Christianity. The film portrays some of the most famous events of this period in the late 4th-early 5th centuries AD, when the Roman Empire finally split into Eastern and Western halves, and Christianity displaced traditional Greco-Roman culture. Weisz gives an understated but ultimately successful performance as the doomed scientist Hypatia,who doesn't split hairs between Pagan, Christian, or Jew, and who is rapidly becoming the sole voice of reason in a volatile city-wide war of faith. All the actors stand out in their own ways, no matter how small the part, including Max Minghella as Davus, the slave who loves Hypatia, and Oscar Isaac as Orestes, who attempts to woo the philosopher only to be rebuffed in a particularly brutal way. Amenabar felt no need to superimpose sexuality onto Hypatia's famously virginal frame, so those looking for a dazzling romance should go elsewhere. Those under the impression that the early Christians were all about lions laying down with lambs are probably in for a uncomfortable shock. . .at the same time, neither Paganism or Judaism are allowed to get off scot free. All three religions are depicted in an honest way. The formerly persecuted Christians seem to see nothing wrong with copying the behavior of those who just a few decades previously were persecuting them( the pagans) once they're in power. Similarly, the Jews, famously persecuted throughout history, think nothing of returning attacks in kind. The "pagans" (a misnomer referring to all religious practices not of a Christian or Jewish nature) are portrayed as brainy star-gazers who live without a modicum of social justice, owning and abusing slaves, and returning slights to their gods with bloodshed.
So, to sum up, the religious right will probably dislike the film (if they ever hear of it)because it depicts historical events which do not fit into the preconceived narrative of pure and good triumphalism they so ardently claim to believe. All others, whatever faith or lack thereof, will hopefully find it to be an honest conversation starter about the nature of belief systems which claim absolute certainty about the nature of the universe, and what naturally follows from a belief that one's professed religion is the only true path to salvation. If one follows this belief to its logical conclusion, the end result will look something like what happend in the Eastern Roman Empire in late antiquity. And it isn't pretty."""

Res ipsa loquitur. (or to paraphrase Sartre, everyone's guilty)
Posted by J at 10:06 AM

I just have a quick question for you but couldn't find an email so had to resort to this. I am a progressive blogger. Please email me back at barbaraobrien@maacenter.org when you get a chance. Thanks.