""""""It is impossible to find a criterion for determining the validity of ethical judgements. Not because they have an 'absolute' value mysteriously independent of sense-experience, but because they have no objective validity whatsoever. If a sentence makes no statement, there is no sense in asking whether it is true or false. Pure expressions of feeling do not come under the category of truth or falsehood.

The orthodox subjectivist holds that ethical propositions are about the speaker's feelings. If this is so, they could be true or false depending on whether the speaker had the relevant feelings. I can say "I am bored" by tone or gesture without speaking at all, or may be lying about my feelings. We say that ethical statements are excitants of feeling which do not necessarily involve any assertions.

We hold that it is impossible to dispute about questions of value, and that no-one really ever does so. This may seem paradoxical, but when someone disagrees with us about moral value we do not attempt to show that he has wrong ethical feelings. We attempt to show that he is mistaken about the facts of the case, or we employ general arguments about which actions produce what effect. 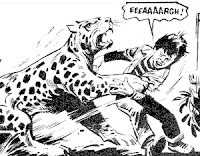 Yikes...Watch out for the Leopard, Billy!

But if our opponent has had different moral conditioning from ourselves so that, even when he acknowledges all the facts he still disagrees, we say that it is impossible to argue with him because he has a distorted moral sense. Our judgement that it is so is itself a moral judgement, and so outside the scope of argument. We finally resort to mere abuse. We praise or condemn in the light of our own feelings.

If anyone doubts this, let him try to construct an argument about values which does not reduce itself to an argument about logic or empirical fact. All that one may legitimately enquire is, What are the moral habits of a given person or group, and what causes them to have these? This is a job for the Social Sciences.""""