""""Censorship was quickly imposed (by the Bolsheviks), and it was up to the Cheka to confiscate the literature of dissident workers: "[O]n 17 November the Central Executive Committee passed a decree giving the bolsheviks control over all newsprint and wide powers of closing down newspapers critical of the regime..." (Leonard Shapiro, The Communist Party of the Soviet Union). Workers were re-forming independent soviets; the Cheka broke them up. Independent newspapers criticized Lenin's government; the Cheka closed them down, until the Bolshevik-controlled Pravda and Izvestia had a monopoly on the supply of news. Shapiro asserts that "The refusal to come to terms with the socialists and the dispersal of the Constituent Assembly led to the logical result that revolutionary terror would now be directed not only against traditional enemies, such as the bourgeoisie or right-wing opponents, but against anyone, be he socialist, worker or peasant, who opposed Bolshevik rule."[19]""""" 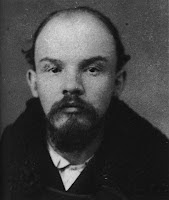 As was the case with the nazis and many other totalitarian regimes, one of the Bolsheviks' first acts was to control the flow of information and communication: not so different from how many blog-police now monitor discussion, debate, and dissent via moderation, censorship, deletion--as with one of the most moderated and controlled bogus leftist sites online, the Huffington Post. (Soviet communists are scary; Brentwood communists ala Arianna and Comrade Warren and Co, scarier). Of course most American cafe leftists--'Burbs apparatchiks--- don't know phuck about orthodox marxism (socially necessary labor anyone? Guess that puts Ho-wood out of work--or StarClucks), the history of the October revolution, or what really went down: the Bolsheviks more or less destroyed any possibility of democratic socialism when they ended parliamentary voting, imprisoned their enemies, and began to seize large tracts of property (how many Californian "leftists" would care to have the State "appropriate" their little slice of paradise out in Putaville---). The control of the press coincided with the creation of the Cheka--purges (and many socialists and non-communist leftists were killed) started not with Stalin as is commonly thought by many leftist dupes, but with Lenin's direct orders to kill thousands following the attempt on his life. The cafe-istas have apparently never bothered to read Bertrand Russell's comments on the Bolsheviks, or the writings of Kropotkin, Dewey (who went from supporter to foe of the soviets), Orwell, etc. etc. Like Che Guevara, VI Lenin's now jus' another hepcat at Cafe a Gauche.
Posted by J at 10:19 AM

Something tells me you've never actually seen Reds. If you had, you wouldn't assume that someone who likes the movie is an admirer of Bolshevism. The movie tells the story of an American journalist who did admire them very much, though in the end, even he had grave doubts they were doing the right thing. Enjoying a dramatic retelling of a personal account of history is not the same thing as worshiping the monster who sat at the focus of the historical events described by the protagonist.

Ah Mr. McMax. I absorbed Reds years ago, but as soon as Nickelson appeared trying to pass off his O'Neill schtick became irritated and tended to lose interest. The Rosa Luxemburg character--Stapleton?--- was perhaps the sort of anarchist-"loyal opposition" to some degree: those were the types of radicals the Bolsheviks had no problem ignoring, imprisoning, and eventually killing (I don't recall the assasination attempt on VIL--supposedly by a female socialist--- really being addressed at all in Reds, but then it has been years). I will attempt it again when I have time.

However, I have read most of Reed's accounts (10 days that shook the World)--, as well as a good bit of REAL history on the October revolution, and feel there was some manipulation on the part of Beatty--(as there was when Eisenstein presented his own somewhat biased account of the Rev. in "October", with VIL as the sort of People's Hero--some clips on youtube). We here at Contingencies believe that Romantic leftists and marxists are generally about as pernicious as romantic fascists.

Was the manipulation on the part of Beatty or on the part of Reed? My understanding, from reading reviews of the film and the background on Reed, was that Beatty created a fairly honest dramatization of the life and perspective of the real Jack Reed. If you came away from the movie with the impression that Reed was not really a communist and didn't really like the Bolsheviks (and Lenin) then Beatty would have failed utterly in recapturing his protagonist's viewpoint. Instead, I felt Reed thought the Russians were the only ones bold enough to do the right thing and he loved them for it. It was only in the end that he began to realize his tragic error (with the help of Emma Goldman's newfound understanding of the horror of the red terror- a great scene in the film). In the end the film is not intending to be supportive of communism. It was an attempt to show what Jack Reed was all about, and in that it succeeded brilliantly. Nicholson's portrayal of O'Neill was a sideshow and unimportant to the larger point of the film. Maybe that's why it was Stapleton (as Goldman) who got the Oscar rather than Nicholson.

Yes I recall there were doubts on the part of Reed---during his journeys, where he takes in a communist-muslim rally, right. I need to watch it again. Beatty though hammed it up as usual. I don't know: I jus' don't enjoy his sort of larger-than-life approach. I wager the real Reed was a bit sharper than Beatty's Reed, and while perhaps a "romantic," not to the extent that Beatty portrayed him in the flick.

Bugsy was an entertaining and somewhat brutal movie. A bit closer to home. Many American consumers simply don't realize that Vegas WAS created by and for the Mob--as was Ho-wood to a large extent. I would agree Monsieur Beatty is a real artiste, but his cinematic art is not to my taste. Ms Keaton I don't care for either. They are not really "actors" per se--but wealthy and powerful celebrities with agendas. Some of us are not down with the Westside, man.

Another quite amusing aspect of many of the Kos sorts of bloggers: they go on and on about Habeas Corpus, Founding Fathers, rights, justice, ad nauseum, and then give their blessings to marxism (or a communist sympathizer such as Beatty), at least implicitly. The USSR was one of the most totalitarian societies to have EVER existed (try to locate habeas corpus or even "rights" mentioned in Marx's writing): and in terms of total death count (the USSR, China, the Khymer Rouge combined) the communists are ahead of even the Third Reich. OK, enjoying Reds does not mean that one approves of communism, but damn close.

And most Kossacks generally have no problem censoring, moderating, or deleting any writing which calls into question their own ideological assumptions, or their own little PC or pacifist code (which is hardly Jeffersonian---TJ was ALL about liberty, and allowing debate and dissent ,and he was more than willing to take on the Barbary pirates---the terrorists of his era--).

It is the ideology which drives most of the left now, not the spirit of "disinterested inquiry" and objective, scientific reasoning that the Founding Fathers valued. There are zealots on the right: but they are generally matched by zealots on the left. And anyone who thinks the rationalists such as Jefferson, Madison, or Franklin would be marching alongside the likes of Boy Obama or Hillarity should be like put back on his Mellaril drip. Franklin was to the right of Jefferson, and really a sort of Humean (or aspired to that): not with the plebes.