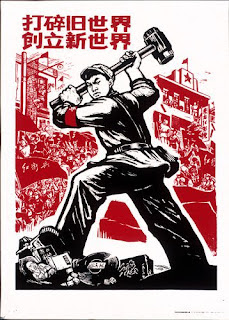 In Chinese, "We'll destroy old world and build a new one." Maoist art from the early Cultural Revolution (1966): note that the Worker crushes the crucifix, Buddha and classical chinese texts with his hammer.
Posted by J at 12:34 PM

Are you addressing us, McMax?

You want to discuss atrocity--contemporary, or historical--make it equal-opportunity. Rule #1 of secularism. And the Reds, whether Maoist or Stalinist, are definitely contenders for genocidal masters of the 20th century (tho' nazis rather more efficient and ruthless at it). Even now there are rumors that Iran has been plotting with China in regards to defense strategies. No rational person wants war--or some macho, biblethumpin' conservatives to turn Slim Pickens-nuke-hawks---but there are villains in the world other than the USA.

Here's a recent book you might place next to the Memoirs of Jonny Appleseed:

""Mao: The Untold Story" exposes its subject as probably the most disgusting of the bloody troika of 20th-century tyrant-messiahs, in terms of character, deeds — and number of victims... This is the first intimate, political biography of the greatest monster of them all — the Red Emperor of China. Using witnesses in China, and new, secret Chinese archives, the authors of this magisterial and damning book estimate that Mao was responsible for 70m deaths."[15]

Nothing to add really. The dude was bad news. Hard to believe that it's possible for any individual to be responsible for the deaths of tens of millions, let alone three of them in the past century alone. Got to be a lot of enablers involved.

J said...
That's true. It's not just a Mao or Stalin or Hitler, but all the obedient robots who carried out the orders to liquidate as well. Nonetheless the real totalitarian dictator obviously possesses some strange power over his people (one might even call it occult-like), and his guilt seems exponential compared to the robots.

I have read some excerpts from "Mao: The Untold Story," and it's rather horrifying. And the numbers of deaths are considered a conservative estimate.