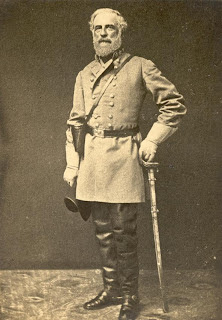 "My chief concern is to try to be an humble, earnest Christian."

"We failed, but in the good providence of God apparent failure often proves a blessing."

"My trust is in the mercy and wisdom of a kind Providence, who ordereth all things for our good."

Lee was an Episcopalian vestryman, well read in Greek and Latin classics, history, and excelled in mathematics and engineering. We don't approve of his religious leanings--though they are not nearly as nutty as those of say Abe Lincoln, or many 19th century Americans.

Lee on occasion offered a few pious bon mots, but was no fundamentalist or Baptist. And he had some not-half-bad political ideas, and came near to wiping yankee liberals and do-gooders off the map. Actually perhaps a bit indecisive, though 2nd Bull Run rocked. JEB Stuart: now JEB knew how to handle Feds, or their n-gahs.

Besides, you are lying. X-ron has made numerous anti-Darwinian comments on your site, and more than a few in favor of Xtianity. He more or less makes up whatever he wants to (like his latest imbecilities about 911), posts it, and you take it as truth.