the intellectual failings of Ayn Rand, continued...
Garbage and Gravitas/Robin:


"""[Ayn] Rand's following in Hollywood has always been strong. Barbara Stanwyck and Veronica Lake fought to play the part of Dominique Francon in the movie version of The Fountainhead. Never to be outdone in that department, Joan Crawford threw a dinner party for Rand in which she dressed as Francon, wearing a streaming white gown dotted with aquamarine gemstones. More recently, the author of The Virtue of Selfishness and the statement "if civilization is to survive, it is the altruist morality that men have to reject" has found an unlikely pair of fans in the Hollywood humanitarian set. Rand "has a very interesting philosophy," says Angelina Jolie. "You re-evaluate your own life and what's important to you." The Fountainhead "is so dense and complex," marvels Brad Pitt, "it would have to be a six-hour movie." (The 1949 film version has a running time of 113 minutes, and it feels long.) Christina Ricci claims that The Fountainhead is her favorite book because it taught her that "you're not a bad person if you don't love everyone." Rob Lowe boasts that Atlas Shrugged is "a stupendous achievement, and I just adore it." And any boyfriend of Eva Mendes, the actress says, "has to be an Ayn Rand fan."

But Rand, at least according to her fiction, shouldn't have attracted any fans at all. The central plot device of her novels is the conflict between the creative individual and the hostile mass. The greater the individual's achievement, the greater the mass's resistance. As Howard Roark, The Fountainhead's architect hero, puts it:

Rand clearly thought of herself as one of these creators. In an interview with Mike Wallace she declared herself "the most creative thinker alive." That was in 1957, when Arendt, Quine, Sartre, Camus, Lukács, Adorno, Murdoch, Heidegger, Beauvoir, Rawls, Anscombe and Popper were all at work. It was also the year of the first performance of Endgame and the publication of Pnin, Doctor Zhivago and The Cat in the Hat. Two years later, Rand told Wallace that "the only philosopher who ever influenced me" was Aristotle. Otherwise, everything came "out of my own mind." She boasted to her friends and to her publisher at Random House, Bennet Cerf, that she was "challenging the cultural tradition of two and a half thousand years." She saw herself as she saw Roark, who said, "I inherit nothing. I stand at the end of no tradition. I may, perhaps, stand at the beginning of one." But tens of thousands of fans were already standing with her. In 1945, just two years after its publication, The Fountainhead sold 100,000 copies. In 1957, the year Atlas Shrugged was published, it sat on the New York Times bestseller list for twenty-one weeks.""" 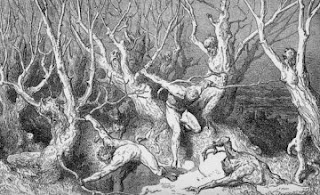 
We should not be astonished that ho-wood celebrities worship the atheist Rand (and her cousins, the Scientologists and/or that lizardy pulp-hack RA Heinlein). The Randian code in a sense provides some justification for the existence of narcissistic, superficial show biz types such as Pitt and Jolie. Hardly actors as in thespians (like, let's see your Iago, Bradski, or Sam Spade for that matter), Pitts, Jolies, Riccis, Lowes, Diazes et al are the phony royalty of the US entertainment business; they pride themselves on a sort of blase American incompetence, really--a trend started by Sinatra and the "Rat pack", most likely (the mafia's associations to ho-wood should be kept in mind as well). Ayn-ism says in effect, enjoy your fame, your ostentatious, obscene wealth and power, kids, whether you deserved it or not (read a few pages of the Fountainhead and discover for yourselves, hepster). For according to Rand's cliffsnotes Aristotle, G*d's dead (or, He never lived at-tall, as Richie Dawkins yawps), robber-baron capitalism rules, and about anything goes, as long as you do it with chutzpah, and some half-baked pseudo-intellectual pose (tho'....the aging Rand seems to have mellowed a bit and at times affirmed the principles of Locke--at least the political parts she understood-- and the Founding Crackers. She opposed maoists (correctly), and may have, in proto-Teabag style, even objected to the Vietnam war---at least as an inefficient use of funds--the Divine Ayn probably rests in a shabby section of the City of Dis, a few streets above nazis and communists).
Posted by J at 10:01 AM