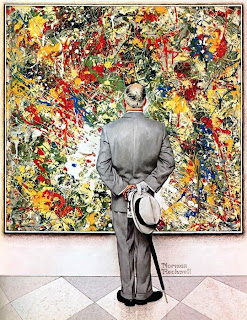 It sounds like every thrift store shopper’s dream. Teri Horton, a 75-year-old former long-haul trucker, bought a painting for a friend as a gag in a California thrift store, only to learn that it could be a lost masterpiece by Jackson Pollock worth more than $50,000,000. The original price tag: $5.


“I saw it at the shop and I asked how much they wanted for it. They told me eight dollars,” says Horton. “I told them, ‘I love my friend, but I don’t love her that much. I’ll give you five.’”

When the painting wouldn’t fit into her friend’s mobile home, Horton brought it back to hers and eventually tried to sell it at a yard sale. When a local art teacher remarked that the painting could be a Pollock, Horton responded with what would later become the title of a documentary about her find: “Who the $#&* is Jackson Pollock?”

Those ahhtistes who will never be Rembrandts or even Rockwells might aspire to Pollock-ness Abstraction, Inc--and cash it in (or, possibly fake your death, and set up your estate properly, THEN rake it in).
Posted by J at 10:54 AM