""""Zizek has been hailed as one of the world’s greatest public intellectuals, a leading postmodern, or “post-Marxist” philosopher and an “Elvis of cultural theory.” He is sought after for visiting faculty positions in both Europe and the US and has a loyal following, particularly among a layer of academics and would-be academics who were well represented in his largely homogenous New York City audience.

This narrow social layer is ‌‌Zizek’s universe and his comic spiels are tailored to provoke, titillate and amuse them.

Philosophically, ‌‌Zizek is not an original or innovative thinker. While one academic commentator has claimed that Hegel and Marx are among his core influences, that is a false genealogy.

Zizek is an outgrowth of a reactionary anti-Marxist and anti-materialist tradition that descends from the irrationalism of Schelling, Kierkegaard, Nietzsche and Heidegger. He eclectically draws on the neo-Nietzschean and neo-Heideggerian thought of 1960s French post-structuralism, having adopted the ideas of its leading intellectuals—especially the post-Heideggerian psychoanalysis of Jacques Lacan—when he was a graduate student.""""

Few in NASCAR-Land or Balltown will realize the significance of this, or the abiding power of TrotskyCo for that matter. Maybe when they're on boxcars (or the Peoples' F-150s) headed to Southwestern gulags they might.  That said, the WSWSsters may have overlooked Zizek's bolshevik inclinations--yes, he does rely heavily upon the  "latin quartier Heideggerians" (alas), but he also quotes Lenin at length in the Parallax View (and elsewhere).  With proper re-education, Comrade SZ might escape the fate of the bourgeois liberals and their redneck and/or mormon goons . 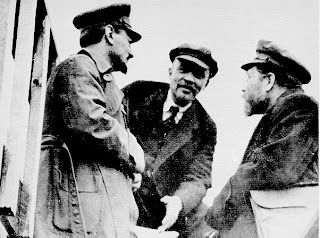 
"""For argument’s sake, let us grant that all previous revolutionary history and, if you please, all history in general is nothing but a chain of mistakes. But what to do about present day reality? What about the colossal army of permanently unemployed, the pauperized farmers, the general decline of economic levels, the approaching war? The skeptical wiseacres promise us that sometime in the future they will catalogue all the banana peels on which the great revolutionary movements of the past have slipped. But will these gentlemen tell us what to do today, right now?


We would wait in vain for an answer. The terrified rationalists are disarming themselves in the face of reaction, renouncing scientific social thought, surrendering not only material but also moral positions, and depriving themselves of any claim to revolutionary vengeance in the future. Yet the conditions which have prepared the present wave of reaction are extremely unstable, contradictory and ephemeral and they prepare the ground for a new offensive by the proletariat. The leadership of this offensive will justly belong to those whom the rationalists call dogmatists and sectarians. Because “dogmatists” and “sectarians” refuse to renounce the scientific method so long as nobody, absolutely nobody has proposed anything superior in its place."""

""""Some would-be “pundits” have even accused me of “suddenly” raising the “Jewish question” and of intending to create some kind of ghetto for the Jews. I can only shrug my shoulders in pity. I have lived my whole life outside Jewish circles. I have always worked in the Russian workers’ movement. My native tongue is Russian. Unfortunately, I have not even learned to read Jewish. The Jewish question has never occupied the center of my attention. But that does not mean that I have the right to be blind to the Jewish problem which exists and demands solution. “The Friends of the USSR” are satisfied with the creation of Birobidjan. I will not stop at this point to consider whether it was built on a sound foundation, and what type of regime exists there. (Birobidjan cannot help reflecting all the vices of bureaucratic despotism.) But not a single progressive, thinking individual will object to the USSR designating a special territory for those of its citizens who feel themselves to be Jews, who use the Jewish language in preference to all others and who wish to live as a compact mass. Is this or is this not a ghetto? During the period of Soviet democracy, of completely voluntary migrations, there could be no talk about ghettos. But the Jewish question, by the very manner in which settlements of Jews occurred, assumes an international aspect. Are we not correct in saying that a world socialist federation would have to make possible the creation of a “Birobidjan” for those Jews who wish to have their own autonomous republic as the arena for their own culture? It may be presumed that a socialist democracy will not resort to compulsory assimilation."""


The Mexican press published on June 1 1940
a letter, written by Leon Trotsky to the attorney general of Mexico, the chief of the federal police, and the foreign minister. By this letter Trotsky successfully thwarted attempts to direct away from the Stalinists the investigation of the May 24 attempt to assassinate Trotsky. The letter follows:


""""It is first of all necessary to affirm that the attempted assassination could only be instigated by the Kremlin; by Stalin through the agency of the GPU abroad. During the last few years, Stalin has shot hundreds of real or supposed friends of mine. He actually exterminated my entire family, except me, my wife and one of my grandchildren. Through his agents abroad he assassinated one of the old leaders of the GPU, Ignace Reiss, who had publicly declared himself a partisan of mine. This fact has been established by the French police and the Swiss judiciary. The same GPU agents who killed Reiss trailed my son in Paris. On the night of November 7, 1936, GPU agents broke into the Scientific Institute of Paris and stole part of my archives. Two of my secretaries, Erwin Wolff and Rudolf Klement, were assassinated by the GPU; the first in Spain, the second in Paris. All the theatrical Moscow trials during 1936-37 had as their aim to get me into the hands of the GPU.

In saying this I do not exclude the possibility of the participation of Hitler’s Gestapo in the assassination attempt. Up to a certain point, the GPU and the Gestapo are connected with each other; it is possible and probable that in special cases the same agents are at the disposal of both. Authoritative representatives of the German government have publicly indicated that they consider me a dangerous enemy. It is completely possible that these two police forces cooperated in the attempt against me.""""
jackals
Posted by J at 8:36 AM