"""When asked by one of the lords what he was doing in possession of so much gunpowder, Fawkes answered that his intention was "to blow you Scotch beggars back to your native mountains." He identified himself as a 36-year-old Catholic from Netherdale in Yorkshire, and gave his father's name as Thomas and his mother's as Edith Jackson. Wounds on his body noted by his questioners he explained as the effects of pleurisy. Fawkes admitted his intention to blow up the House of Lords, and expressed regret at his failure to do so. His steadfast manner earned him the admiration of King James, who described Fawkes as possessing "a Roman resolution"...."" 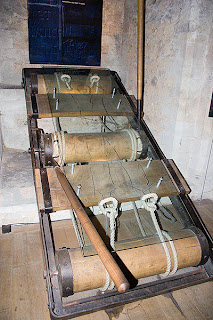 ah that i could die so nobley

a prophet never at home

you can quote me on that


I'm tempted to agree...and read between the lines, and ...well, History is written by the victors, which were the Anglican royals in this case. So Fawkes becomes sort of an image of papist subversion and so forth--and even early Americans, puritans, presbyterians, baptist-boneheads, etc. celebrated GF day.

Liz I and her porky, syphlittic pop Hank VIII were tyrants, certainly to the non-protestant, like Thomas More, and his associates. Note that one "Percy" was counted among the rebels--that's Walker Percy's ancestor, and WP in a sense opened my eyes to the fact of the anglo royals' and protestant savagery against catholics, continued in a more baptist form via Cromwell's march (Cromwell still vilified in many an irish pub....as Joyce noted in Ulysses). We're still surrounded by Cromwellian roundheads.

Yes the attacks on El Papa trouble a bit--Hitchens for one has sounded like a hyenda (though alas we can't exactly ignore the scandals). Personally I think much of the US media cooked up the catholic bashing during the Iraqi war, when JP II, and then Benny criticized BushCo--even the blogger "liberals" forget that JP II opposed the war, and dissed American imperialism .