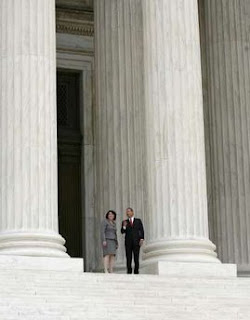 "It cannot be supposed that they should intend, had they a power so to do, to give any one or more an absolute arbitrary power over their persons and estates, and put a force into the magistrate's hand to execute his unlimited will arbitrarily upon them; this were to put themselves into a worse condition than the state of Nature, wherein they had a liberty to defend their right against the injuries of others, and were upon equal terms of force to maintain it, whether invaded by a single man or many in combination. Whereas by supposing they have given up themselves to the absolute arbitrary power and will of a legislator, they have disarmed themselves, and armed him to make a prey of them when he pleases..." (Locke, 2nd TOCG)
Posted by J at 2:53 PM