Russell on the Design hypothesis

"When you come to look into this Argument from Design, it is a most astonishing thing that people can believe that this world, with all the things that are in it, with all its defects, should be the best that omnipotence and omniscience have been able to produce in millions of years. I really cannot believe it. Do you think that, if you were granted omnipotence and omniscience and millions of years in which to perfect your world, you could produce nothing better than the Ku Klux Klan or the fascists? Moreover, if you accept the ordinary laws of science, you have to suppose that human life and life in general on this planet will die out in due course: it is a stage in the decay of the solar system; at a certain stage of decay you get the sort of conditions and temperature and so forth which are suitable to protoplasm, and there is life for a short time in the life of the whole solar system. You see in the moon the sort of thing to which the earth is tending -- something dead, cold, and lifeless." 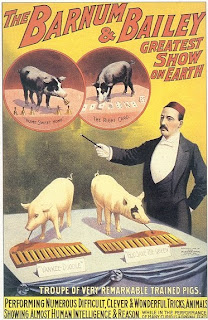