In Sam Spade and the unnamed detective known as "the Continental Op," from "Red Harvest," Hammett gave us the first American antiheroes, and in doing so severed forever the traditional relationship between the mystery story and the crime story. Hammett never really cared much for writing mystery stories; the mystery as to who killed who in "The Maltese Falcon" and "The Thin Man" is pursued with no great urgency, and the murders that kick off the stories only seem to happen because the conventions of period detective fiction demanded them. The mystery story, by definition, must involve a clear delineation between good and evil: The criminal must be punished and the reader must have a clear sense that good has triumphed, or what would be the point of solving the mystery? In the crime story, solving a mystery can never entirely be the point; it's a genre far more unsettling than anything that could have been imagined in the world of Sherlock Holmes, because in the real world, as we all know, the responsibility for crime spreads so far into society that no one is ever entirely free of guilt. There is no neat ending to ever make us truly feel that good has triumphed over evil.

"Red Harvest" achieved something else, too. It plays off the conventions of the western and helped create a genre that was just emerging in 1929, when it was published: the gangster novel. 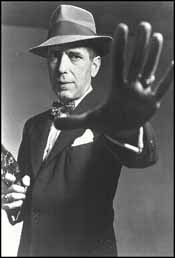 The plot is simplicity itself. A detective from a national agency is summoned to investigate a murder in a Western mining town named Personville, sardonically referred to by the locals as "Poisonville." Personville, or Poisonville, is "an ugly city of forty thousand people, set in an ugly notch between two ugly mountains that had been all dirtied up by mining. Spread over this was a grimy sky that looked as if it had come out of smelters' stacks." (In 1927, Hammett, who would become a committed Marxist, had been what biographer William F. Nolan called a "politically involved strike breaker" for the Pinkerton Detective Agency in Butte, Mont., so we can assume the novel was set there. In "Red Harvest" he would wreak fictional revenge on the anti-union goons.)"""""

Straight no chaser (though Dash was no PC lib-rawl role model). Maybe, if the KOS goobers (and gooberettes) read Hammett for a few months, that would transform that bureaucratic pathos and phony gonzo-lite writing into some dread noir realism........perish the thought
Posted by J at 7:06 AM