A few libertarian eggheads, like Gordon, opposed Le Guerre BushCo, and went so far as to quote the dovey Greenwald (one of a few somewhat principled demo pundits).

""""Greenwald contends that the president and his advisors are gripped by a Manichean mentality. Like the ancient Manichees, Bush sees this world as a struggle between absolute good and evil:

"""The term Manichean refers in its most literal sense to a religion founded in the third century by the Persian prophet Manes … it central precept was that the entire world could be cleanly divided into two opposing spheres — God and Satan in the world of the eternal, and a corresponding battle of Good and Evil playing out on earth … the historical fate of the Manichees is of far less interest than is contemporary reliance on their religion's central moral tenets. In the overwhelming majority of President Bush's significant speeches and interviews throughout his political career — but particularly since the 9/11 attacks — he evinces a dualistic worldview lodged at the core of his belief system."" (p. 46)

Here it is important to avoid misunderstanding. Greenwald does not argue as a moral skeptic, denying that any distinction can be drawn between good and evil. Rather, what concerns him is the readiness with which the Bush administration views other countries as so dominated by evil that they cannot be expected to act rationally.[1] 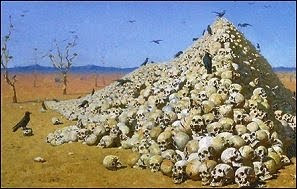 
Because Bush and his cohorts view themselves as engaged in a total struggle against absolute evil, they endeavor to increase their power to the greatest extent possible. If one faces a totally evil foe, must one not respond with maximum force?

Further, for the Manichean believer, the battle between Good and Evil is paramount. It subordinates all other considerations and never gives way to any conflicting or inconsistent goals. Measures intended to promote Good or undermine Evil are, by definition, necessary and just. (p. 48)

Greenwald points out that, despite the claims of various radio talk-show hosts, Bush is very far from being a conservative. Traditionally, American conservatism has stressed limited government, federalism, and balanced budgets. For our Leader, these are obstacles to the imperative demands of moralism:

President Bush has not only violated every claimed tenet of conservatism when it comes to restraints on federal spending, but he ranks among the most fiscally reckless presidents in modern times…. These massive spending increases are entirely independent of any 9/11 related or defense-based expenditures…. The Bush administration has also repeatedly asserted the prerogatives of federal power in areas traditionally reserved to the states. (pp. 42–3)""""""