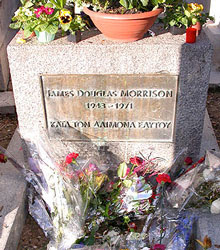 Admiral George Stephen Morrison placed the plaque with the greek inscription "ΚΑΤΑ ΤΟΝ ΔΑΙΜΟΝΑ ΕΑΥΤΟΥ"-- literally, "According to his own Daemon"--on his son Jim's grave in Pere Lachaise  in the 90s.


We're not especially into the Doors or Rock-Co though Morrison had more talent than the usual rock-wordsmith. He was supposedly hip to Brecht/Weill, beat writers, and had read Nietzsche as a teenager before attending UCLA and then embarking on his rock adventures. Before he starting swilling whiskey and shooting heroin, Morrison looked like a dead ringer for WB Yeats, IMHE. He also made some interesting short films. The facts of his short and tragic life have all been pretty well established, given Stone's flick, Sugarman's book, Manzarek's writing so forth.

The Doors' material on Youtube reveals another factoid, however: American pigs rolled Jim more than a few times. That may have lent him some street cred., and he was from all reports quite a troublemaker, generally inebriated or stoned while on stage (another hip bourgeois decadent, according to the apparatchiks of the time).

The Doors' concert footage features quite a few shots of fat lawmen tossing Morrison around, at times in cuffs, swiping at him with batons, floorstomping in one. They're not all rednecks but rather multicultural-- probably good union Democrats, as most of Daley's thugs were in Chicago '68. Now rock may not have been equivalent to politics, but Jim's abuse at the hands of the pigs offers a lesson of sorts, perhaps obvious to some, but not to all in the Liberal-zombie blogopolis. The 60s rebels generally were not loyal Democrats, not interested in supporting LBJs, or Humphreys, unionists, or the vichy mobsters AKA the Kennedys. (Hunter S Thompson at least sort of got that, before Gonzo was commodified as well, as Beat had been). Freaks were not generally supporting the likes of Nixon and Kissinger either, or some pieces of human scheisse such as Aynnie Rand & Co--and freaks, hippies, subversives, whether of college or street type, had their own issues--but the current crop of lockstep liberals-- whether d-Kos/DU/TPM snitchy sentimentalists or Salon-Slate quasi-hipsters--simply don't understand the real and somewhat inscrutable meaning of the 60s counterculture, any more than does the average biblethumping moralist.

behind the roadhouse they got some bungalows...
Posted by J at 6:48 PM