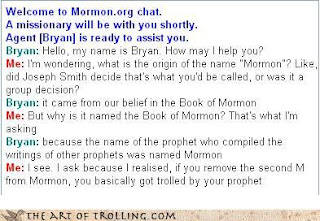 ""Half an hour or an hour later, we changed horses, and took supper with a Mormon "Destroying Angel." "Destroying Angels," as I understand it, are Latter-Day Saints who are set apart by the church to conduct permanent disappearances of obnoxious citizens. I had heard a deal about these Mormon Destroying Angels and the dark and bloody deeds they had done, and when I entered this one's house I had my shudder all ready. But alas for all our romances, he was nothing but a loud, profane, offensive, old blackguard! He was murderous enough, possibly, to fill the bill of a Destroyer, but would you have any kind of an Angel devoid of dignity? Could you abide an Angel in an unclean shirt and no suspenders? Could you respect an Angel with a horse-laugh and a swagger like a buccaneer?

There were other blackguards present - comrades of this one. And there was one person that looked like a gentleman - Heber C. Kimball's son, tall and well made, and thirty years old, perhaps. A lot of slatternly women flitted hither and thither in a hurry, with coffee-pots, plates of bread, and other appurtenances to supper, and these were said to be the wives of the Angel - or some of them, at least. And of course they were; for if they had been hired "help" they would not have let an angel from above storm and swear at them as he did, let alone one from the place this one hailed from.

This was our first experience of the western "peculiar institution," and it was not very prepossessing. We did not tarry long to observe it, but hurried on to the home of the Latter-Day Saints, the stronghold of the prophets, the capital of the only absolute monarch in America - Great Salt Lake City.""