(The Cult of Mormonism, cont.)

“These records were engraven on plates which had the appearance of gold, each plate was six inches wide and eight inches long and not quite so thick as common tin. They were filled with engravings, in Egyptian characters and bound together in a volume, as the leaves of a book with three rings running through the whole. The volume was something near six inches in thickness, a part of which was sealed. The characters on the unsealed part were small, and beautifully engraved. The whole book exhibited many marks of antiquity in its construction and much skill in the art of engraving. With the records was found a curious instrument which the ancients called "Urim and Thummim," which consisted of two transparent stones set in the rim of a bow fastened to a breastplate.”
- Joseph Smith, March, 1842 letter to the editor of the Chicago Democrat"


The staff of Contingencies offers a hearty WHOA to the memory of Joe Smith, discover of Las Placas. Where are they now, tho' LDS-bots? Nadie sabe. Maybe Mitt-Man (someone that f-n lame must work for the DNC-o-crats) will share the secrets of Las Placas with the heathens.

Alas, HS Thompson no longer occupies this mortal plane of existence: were Doc Gonzo around he'd give Mitt-Man the public flogging he deserves. 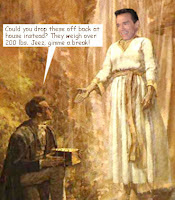