"Similarly, to maintain that Hamlet, for example, exists in his own world, namely, in the world of Shakespeare's imagination, just as truly as (say) Napoleon existed in the ordinary world, is to say something deliberately confusing, or else confused to a degree which is scarcely credible. There is only one world, the 'real' world: Shakespeare's imagination is part of it, and the thoughts that he had in writing Hamlet are real. So are the thoughts that we have in reading the play. But it is of the very essence of fiction that only the thoughts, feelings, etc., in Shakespeare and his readers are real, and that there is not, in addition to them, an objective Hamlet. When you have taken account of all the feelings roused by Napoleon in writers and readers of history, you have not touched the actual man; but in the case of Hamlet you have come to the end of him. If no one thought about Hamlet, there would be nothing left of him; if no one had thought about Napoleon, he would have soon seen to it that some one did. The sense of reality is vital in logic, and whoever juggles with it by pretending that Hamlet has another kind of reality is doing a disservice to thought. A robust sense of reality is very necessary in framing a correct analysis of propositions about unicorns, golden mountains, round squares, and other pseudo-objects"

Lord Russell raises an important point here, however bo-ring that point may seem to most literary hepcats. Are there aesthetic truths (say the "truth" of Hamlet) in the way there are say truths of natural sciences or history, or truths arrived at in calculus or formal logic? The traditional "epistemological" divide splits analytical truth (pertaining to mathematics and formal logic–deductive) from synthetic truth (inductive knowledge based on inference and observation: biology, chemistry, physics, as well as social sciences). Leibniz, one of the founders of integral calc. along with Newton, made this distinction: and Russell was quite aware of Leibnizian thought. Where does literary/aesthetic "knowledge" (not to say theology/mysticism) fall on this divide then? Not easily placed, but most would say it is closer to induction or "qualitative" psychology, than to deduction, or quantitative/analytical reasoning. 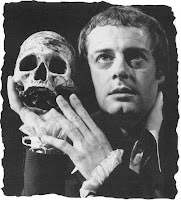 The play Hamlet offers no facts; it is not history, tho' it may contain a few historical allusions (rather difficult to confirm as well). The play Hamlet thus might be interpreted as sort of an eloquent Prevarication (we here at Contingencies are not complete Philistines and would allow the Bard's strange works to be kept in libraries the world over--not sure about other, lesser Lit-Liars, however). Similarly, a few pages of authentic WWI history--say, regarding the burger-stands of Verdun or the Somme-- in effect reduces Joyce's Dantean vision of Ulysses to near nothingness (stalinism, fascism, Hiroshima, 'Nam continue that reduction). A fortiori, the latest fictional potboiler, whether Updike, or the latest sales-pitch fromUrsula La Hen, should not be mistaken for some accurate represenation of, for lack of a better term, bio-economic Reality. IN some sense then Russell reaffirms a rather classical and skeptical view of aesthetic claims: in the Republic Plato (speaking through the Russell-like Socrates) bans the lyric poet from the ideal state.
Posted by J at 10:48 AM

You're not going to like this, but Heinlein is way ahead of you here. The Number of the Beast used this idea as a primary plot device. The main characters had a spaceship that could travel through various dimensions, one of which was through parallel worlds created by the minds of great artists and particularly those shared by a large audience. Oz, for example was very real because of how many people had read Baum's books and seen the movie. Heinlein like this idea, of course, because it meant that his well fleshed out (and well-read) future history was real as well. That's how Lazarus Long ended up a character in the story along with many other Heinlein favorites.

Maybe I won't burn that one.

Au contraire: Russell is way ahead of you, and of Heinlein. That a fictioneer invokes a parallel world does not at all imply that such parallel worlds exist (and some quotes of a few minority (and generally misunderstood) positions of the Copenhagen Interpretation of QP are not all supporting evidence for ANY fictional tale). Indeed Heinlein is another Baum: they both are selling a bogus bill of goods, however entertaining.

You are missing Russell's point, anyways. Had you read a bit of Russell (who on occasion advised his pal Einstein on modern mathematics, Minkowski, etc.), instead of fiction, you might have realized that. Multiple probabilities, likelihoods, unknown eventualities--even at subatomic levels---are not "places" (nor are the speculative worlds/characters/plots of fiction real) You think otherwise, or believe that your "mind" somehow exists independently of your bio-chemical body? Quit eating--or say ingesting H20--and let's calculate the probability of your survival.

I'm shocked. You censor here? I thought you had strong feelings against that?

I am not sure I would call it censoring: more like a knave-control policy. Someone who starts off by telling you you are full of shit, incapable of thought, anti-scientific, wasting your life, a creep, etc. is not going to get posted on here (sort of your policy as well, raht), even if he then includes "but I still might let you live" at the end. I'm not into rasslin'g: chess more my style (e4, B-boy)

But I never hint at the contents of rejected posts (or even that they exist). Once you start dissecting it publicly it's only fair to let the original speak for itself. Got me damn curious now.

I was disappointed by his absolute rejection of all spirituality as brain chemistry. Just didn’t seem as logical as quantum mechanics, which encompasses everything — however one chooses to affect the quantum foam is ‘real’ — eveything is valid, or nothing is valid, right?

Non-Sequituronius marches on! Note the assumption that quantum mechanics somehow preserves spirituality, or "immaterialism", and that this supposed immaterialist mysticism is even more logical than the physical events that Bohr and Heisenberg described (which had nothing to do with brain chemistry, except by the greatest stretches of imagination and metaphor) --indeed, this a complete misreading, and anti-scientific perspective that both Bohr and Einstein denounced.

There's also an assumption that the physicists involved in the Copenhagen interpretation (or Einstein) were all some groovy mystics (BS spread by some of the new age hucksters), and that is not the case. Einstein for instance was no mystic, and was a determinist, and denounced mysticism. Besides, as a few sharper tools in the shed have realized, quantum physics shows indeterminacy, and randomness and that if anything is less mystical and more chaotic than the predictable order of Newtonian mechanics (or Newton as updated by Einstein). Quantum mechanics is ammunition for the skeptic.


AS far as denying bio-chemical dependency, and proving your Quantum Ghost, start by not ingesting H20 for a few days, or not ingesting food, or say turning on your car by power of Mind itself. Go back to Newton.

NICHT. Another logical error:
Some arguments are valid and some arguments are invalid (like yours, B-boy). But you don't know Modus Ponens from Moonchild. (and in traditional religious terms (assuming they hold for the sake of argument) this entire belch from B-boy another incredibly arrogant, blasphemous, narcissistic idiocy guaran-teeeeeed to have him meeting Yog Sogoth at some point. Uncle Al btw was a deviant, criminal POS, even if he played a decent game of chess and knew etre et avoir (unlike B-boy)). Moreover, don't talk about Logic if you don't know scheisse about propositional or predicate form, much less Syllogism 101 (and problems related to that) .

Additionally. the scientific method, even at quantum levels, denies the possibility of religious inferences from any data: das ist verboten (as Dawkins hisself says). Indeed the new-agers who took the stranger anomalies of Bohr and Heisenberg to be indicative of mysticism or immaterialism are making an unwarranted inference, and indeed affirming a sort of Design Argument, even if they think that the Design comes fromm Khrishna, rather than Khrist. Either way, not at all what the Copenhagen experiment was about. Bohr was no mystic.