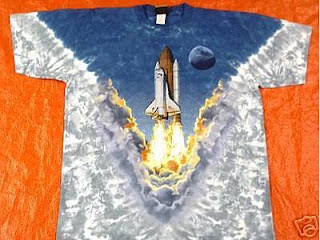 Dewd--I am so with those guys. That hole in the belly of their ship! Yikes. I wager they are saying a few Ave Marias. Speaking of wagers, Pascal's Wager is one of the most famous--an early example of a decision matrix. Here it is in brief:

You live as though God exists.
If God exists, you go to heaven: your gain is infinite.
If God does not exist, you gain nothing & lose nothing.

Many Xtians, of course, don't have a problem with being greedy, self-serving opportunists, supporting US Total War Incorporated (or NASA), lying, breaking any number of supposed Scriptural principles. Pascal suggests that the blasphemer (even ones who march to Sunday School each week) in effect has the most to lose, IF God exists (in other words, the wager does NOT offer a proof of "God"--merely what will be the case given a traditional theological account. Though the use of "infinite" is rather questionable, as is the assumption that "God" does reward the "pious." ).
Posted by J at 7:24 AM