Fiction is a lie; novelists, great pretenders and conjurers, and the Lit. Biz functions essentially as a deception, another manifestation of liberal-consumer culture. A character, say in a sci-fi novel might allude to a scientific theory or data, etc. but that is not the raison d'etre of fictional narratives. The fictioneer's rhetoric might be eloquent or feature interesting metaphors, etc. but nonetheless literary narratives are not genuine descriptions of reality, though they are often mistaken for such.

Literary businessmen and women would seemingly replace accounts of WWI--of the blood sport of Verdun or the Somme-- with Ulysses or the Wasteland; William Shirer's Rise and Fall of the Third Reich (a popular work, but it will suffice for illustrative purposes) with any number of works of fiction; objective analyses of the Depression with Dreiser, etc.; the science of Einstein with science-fiction. The lit. biz has, over the last 50 years, indeed mostly succeeded in replacing fact with fiction, however trite that sounds. Most American lit. consumers are more interested in the Wasteland and Bloomsbury melodrama than in WWI or WWII battles or russian history or the Bolsheviks, and most Americans generally know far more about Shakespeare than they do about Tudorian history, and may quote scenes verbatim from Moby Dick and not recall one civil war engagement or major figure. And the lightweight "historicism" of a few Lit. snobs barely begins to address the effects of literary deception.

The authentic progressive--or even old-school Trotskyite--retains a certain ideological opposition to the realm of belle-lettres and to bureaucratic prose of all types. The play Hamlet functions about like the Bible or Koran does; but then so does Marx's writing or that of most liberal Panglosses du jour. One hates to refer to it as dogma, but there are people lower in the Malebolge than Karl Popper.

I make exceptions for a few Greats: Joseph Conrad. Steven Crane. Dostoyevsky (Crime and Pun. a Noir epic, in a sense). A few old-school French realists and Voltaire. Hermie Melville, tho was I believe quite f-n mad. EA Poe's manga amuses, but he was perhaps also mad. (Hawthorne was not mad, but maybe too sane and "kultured"). The Victorian shrews, and most Americuns of the last 50 years or so were mad. Joyce es muy loco, regardless of his clerical and priestly acumen (better a decent history of WWI than a wheelbarrow full of "Ulysses"--). The "Noir" school of writers may be mad, but there is a definite method--related to a detective-like deduction, perhaps-- to their madness (not to be perceived in say the madman's tale of Moby Dick); and EA Poe's best stories also are characterized by that sort of deductive power. Noir in fact has an impact quite more forceful than most traditional literature or the dayglo space-operas of science fiction (though there are a few definite sci-fi greats--PK Dick, JG Ballard, cyberpunks).

Similar to his noir daddy Hammett, James Ellroy may be one of the few authentic pulp visionaries (Tarentino not included in the Club Hammett), and his visions reveal LA for the insane, corrupt dystopia it is. Black Dahlia and LA Con are certainly works of art, comparable, to, say, Pynchon's Crying of Lot 49 (which has a few pulpish hints as well). With White Jazz, still a decent read, he may have got a bit carried away with the chaos and corruption, similiarly with the sort of Truman Capote meets Kafka writing of American Tabloid. I haven't read his most recent, Cold Six Thousand. He's still a bit of a macho cop lover--tho' willing to acknowledge that there are plenty of Dudley Smiths around (and still are). 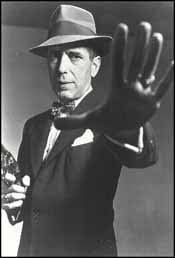 Ellroy is a name in the Wood, as well: Ho-wood. Chandler was processed through the Ho-wood machine decades ago and is, at least from the consumer's POV, not far from Mickey Spillane pulp. Chandler was, after all, an Englishman, and Marlow is still a bit of a British gent. So it's a bit contrived, but then so was Sherlock Holmes. Hammett's Sam Spade, more worldly, cynical, runs closer to the street, but at the same time he seems sort of confused, ineffectual (that may be intended--Hammett's more of a relativist than Chandler) and not nearly as fleshed out as Marlow in Farewell My Lovely or the Long Goodbye. Ellroy, like Hammett, aims for a true-crime, photojournalist-like realism and while I admire that (yet sometimes I find the obscenity a bit gratuitous), I think Chandler was attempting to produce an FS Fitzgerald-like prose as well as noir: he was not only about a sort of photographic realism.

We wouldn't exactly refer to Marlow as phony but perhaps a bit metaphorical in conception; he's not the iconic Holmes of course (tho' with Marlow's chess-playing and so forth, there is still bit of the English detective to him), but he's not an alcoholic, ho-mongering member of the LAPD, as so many of Ellroy's heroes (and anti-heroes are). Chandler's writing and his Marlow-knights are perhaps a bit outdated, but Ellroy-pulp sometimes reads like it was pasted in from sheriff's reports if not True Detective. That's not to say I don't enjoy the pulp aspect: I do--especially Black Dahlia and LA Con. The recent bust of the coke-whiffing Burbank mayor who was shacking up with her Vineland Boys mobster- boytoy right off the pages of Ellroy.


Early Dash--Falcon-, pre-Red, pre-whatever that broad's name was--moves along nicely, but Ray Chandler still outplays him: perhaps that posh and jazzy side of Chandler irritates Our Guy Ellroy, but I think there is more Chandler than Dash in Ellroy manga, and that is part of the maximalist appeal--as in White Jazz--Chandler meets, well, the beats sorta. Later Red-Hammett--the Thin Man stuff--reads rather obscene. It's amusing but a bit unsavory.

As far as Ellroy's cop-rogues go, Jack Vincennes ranks pretty high--tho I think White Jazz as a whole could have used editing--

Ellroy supposedly disavowed Chandler as a forefather, however. Pourquoi? I perceive a distinct Chandler-like sensibility to Ellroy's LA fiction--maybe Chandler too conservative? Hammett wrote with a nice crisp style, but he was quite simplistic in ways. I think Chandler was a better writer in terms of prose, scenes, plotting etc. Posh. Chandler like Ellington to Hammett's Count Basie. Dash's politics also quite leftist if not outright red; Ellroy too a bit of a leftist perhaps--the expose of LAPD corruption (not fleshed out enough in the LA Con flick), the hatred for mafiosos, but riding with Dash and the marxists? Hard to believe.

And given Ellroy's proclaimed conservative inclinations, his fondness for Hammett is a bit odd, tho' hopefully had Hammett known the real history of Stalinism he would have renounced and denounced those jackals.

Jimmy E. got a bit lazy or something, however: pricey dames maybe, booze, who knows. And more macho too--the de rigeur noirish shift from idealist hater of corruption to a bit more cynical conservative: White Jazz could have been penned by some aging LAPD goon on a meth binge, ya know Studio City bungalow with a tasty Weekly gal (I wager "jade") making some gin and tonics, Stan Kenton cranked up in the back. Nonetheless we'll peruse C. 6000 in near future.
Posted by J at 8:18 AM